Goodnight John Boy, a 1970s-Themed Nightclub in the Former Magnolia Space in the Flats, Now Open 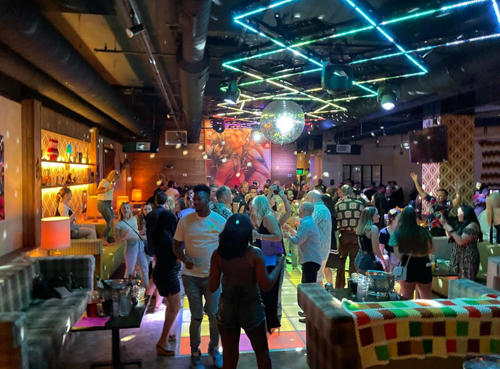 Update: After a glitzy grand opening last weekend, Goodnight John Boy is now open to the public from 4 p.m. to "late" on Friday, noon to "late" Saturday and noon to "late" Sunday. For bottle service, call or text 216-990-2300.

Enjoy a video tour of the nightclub below, and our original preview below that.

(Original story 4/14/21): Pretty soon, the phrase “Goodnight, John Boy” once again will enter the lexicon of Clevelanders of a certain age. This time around, however, it won’t be in relation to one of the most famous lines uttered on 1970s-era television, but rather to a 1970s-themed nightclub from Forward Hospitality Group.

Partners Bobby Rutter and Michael Schwartz first announced the project a year and a half ago, revealing that they would close Magnolia, the speakeasy-style club in the Flats, to pave the way for a new concept. Since then, crews have been hard at work converting the 4,000-square-foot space into Goodnight John Boy, a Studio 54-style club where disco and dance are the main attractions.

Rutter, who proudly claims to be “high on disco,” says that the whole '70s craze is one of the hottest things going right now.

“I think not only is that decade fun, as exemplified by a lot of the current-day music, which is very disco-influenced,” Rutter explains, “but I also think that niche timeframes and certain genres in general are just a lot of fun for people. Whether it’s an '80s place, a '90s place or a supper club, it’s just fun.”

While Forward plans to hold some private events at the club during the NFL Draft, they are shooting on a wider opening around the middle of May. When partiers do cross the threshold, they will be transported back in time to the Gerald Ford administration.

“It looks like your grandparents’ crazy basement, with wood paneling all over the place, shag carpet, linoleum floors and some crazy wallpaper that I can’t believe exists in the world,” Rutter says. “It’s awesome. It’s everything that’s beautiful about the '70s. We’re way out there on the spectrum of cool design.”

There will be room (though likely not for a while) for approximately 250 guests in soft seating, at the bar, some VIP areas and private spaces.

“It’s very eclectic seating,” adds Rutter. “We bought stuff from thrift stores, Facebook market, from all over the place. People have this stuff, they just didn’t know anybody wanted it.”

In addition to the killer sound system, lighted dance floors, deejays and over-the-top design, there will be some smoke and mirrors, promises Rutter.

“One [disco ball] is so gigantic that it will morph the room,” he says.

Out front, a wee travel trailer is being converted to a mini bar.