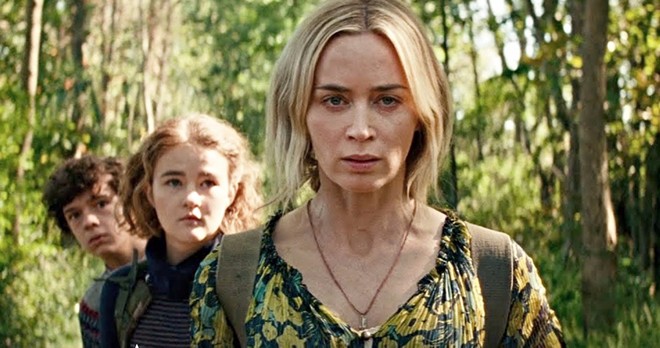 Rakish heartthrob Cillian Murphy is in many ways an anti-John Krasinski. In physical size, off-screen persona, and on-screen energy, the two are practically opposites. One is Irish, lean, private to the point of reclusivity and morally ambiguous. The other is American, brawny, sentimental to the point of mawkishness and heroic by personal preference. One of them is a very good actor, and it's not John Krasinksi.

The Peaky Blinders star is bearded and emotionally frayed as the newest member of the ensemble cast in A Quiet Place Part II, which opens Friday nationwide. His presence elevates what is already an entertaining, high-voltage action-thriller script that builds on the success of the 2018 original.

In defiance of the standard Hollywood playbook, Part II is a relatively modest expansion of the world previously introduced. The bad guys are still alien monsters who are hypersensitive to sound. There is no alien mothership now hovering, no outer-space chases now afoot, and no U.S. military now doing battle on the streets of a major American city. The sequel still takes place in the woods and small towns of upstate New York, and the gimmick – and the chief source of the film’s thrills – remains the same: everyone has to stay silent to avoid detection and death at the monsters' claws.

Directed once again by Krasinski, Part II features Evelyn Abbott (Emily Blunt) and her three children searching for safety after the violent barnyard encounter with which the first film concluded. The hearing-impaired eldest daughter, Regan (Millicent Simmonds), has devised a way to fight back against the monsters and might have a way to broaden the scope of her methods. But in order to be sure, she has to test out her theory a two-day hike away. A new acquaintance, Emmett (Murphy) is enlisted to track her down. Meantime, Evelyn and her injured son Marcus (Noah Jupe) and a new baby must find ways to survive in an abandoned industrial facility. The genius of the script is that every humdrum activity is imbued with life-and-death stakes when it must be completed in silence.

It’s evident that a Part III is on the horizon, and this second installment deftly bridges the gap between opener and closer. The action is creatively staged to maximize both visual and aural thrills and the cast thrives via facial expression in the relative absence of dialogue. An opening prologue that revisits the day the aliens arrive will likely be the most heart-pounding action of the year until F9 drops in a few weeks.