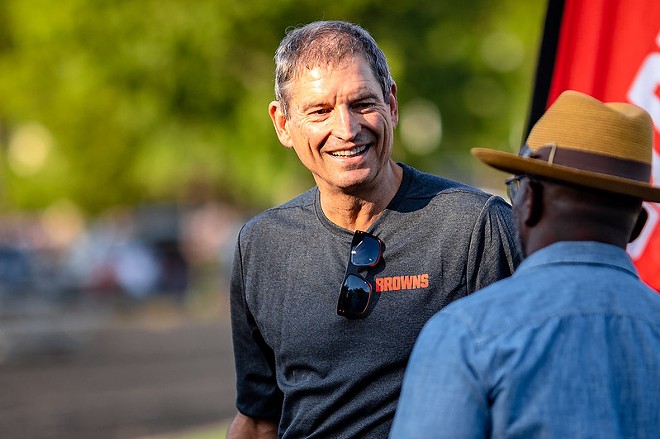 Our weekly roundup of minor but interesting happenings, stuff you missed, stuff we missed, and assorted fun.

- Kevin McTaggart, former top lieutenant to Danny Greene, has spent 38 years in prison for a string of six killings and various drug offenses. He's now seeking release, and has gained support from a wide, interesting array of people, including the FBI agent who put him behind bars. As WKYC reports, that group of supporters, bizarrely enough, counts Bernie Kosar among their ranks.

No. 19 not only wants McTaggart to see freedom after nearly four decades, he's willing to hire and house the former mobster on his Ohio farm, according to a letter to the judge cited by Channel 3.

- While FirstEnergy continues to claim in court battles that its financial contributions to politicians and dark money groups to usher HB6 into passage were completely legal and above-board, the energy giant is also continuing to clean house of the very executives who executed what the Feds have otherwise characterized as a historic $61 million bribery scheme.

The Akron Beacon Journal reports FirstEnergy disclosed this week in an SEC filing that it had fired longtime executive Eileen M. Mikkelsen for her role in the company's $4.3 million consulting contract with former PUCO Chair Sam Randazzo. The FBI targeted Randazzo in a raid last November. He resigned his position days later.

- It simply never gets old seeing midges show up on Cleveland weather radars.

MIDGE ALERT! Midges showing up on radar tonight west of downtown Cleveland along the lakeshore. pic.twitter.com/p9mCnUVfFm


- A longread from New York Magazine well worth your time: "Stop Hustling Black Death: Samaria Rice is the mother of Tamir, not a 'mother of the movement.'”

Although she answers calls from other families of those who have been killed and tries to offer a willing ear and guidance when she can, she doesn’t speak for them. She acknowledges that the families are fractured, that she and the other mothers are not a monolith. That Taylor’s mother, Tamika Palmer, has defended Mallory against Rice’s criticism.

Rice speaks delicately when talking about her relationships with the other mothers. “Each case is unique,” she says. She doesn’t name even those she speaks to regularly. Her sensitivity is twofold: She doesn’t want to overstep, and she knows the reality of their suffering. “Some of these families lose it.” She describes how tragedy can divide kin, how sometimes family members take the opportunity to exploit their relatives. When I ask about her own support system, she says, “It’s very small. I got a lot of support from around the world, but I gotta be careful about who I let around me and in my space.” She returns to her depression. “The mind is very delicate. It can be weak. You have to make sure you care for yourself.”


- In You Simply Love to See It News, from the Columbus Dispatch: "Josh Mandel's Senate campaign sees exodus of fundraisers, sources say."

- One of the last remaining Millionaire's Row mansions left standing could be heading for demolition. Per NEO-Trans:

Unless someone with deep pockets comes through in this 11th hour, the 134-year-old Allen-Sullivan mansion, 7218 Euclid Ave., will be the subject of a demolition request next month. According to a city official who did not want to be named publicly, a demolition permit application submitted on behalf of Signet Real Estate Group is scheduled to be heard June 4 by the City Planning Commission’s Design Review Committee.

10 — Months delinquent K&D, the owners of Reserve Square, are on a $93.4 million loan from 2015 for the apartment complex, according to the Cleveland Business Journal.

$35 million — Amount of federal HUD grant awarded to CMHA to redevelop the Woodhill Homes in Buckeye-Woodhill, one of the first and oldest public housing developments in the country.