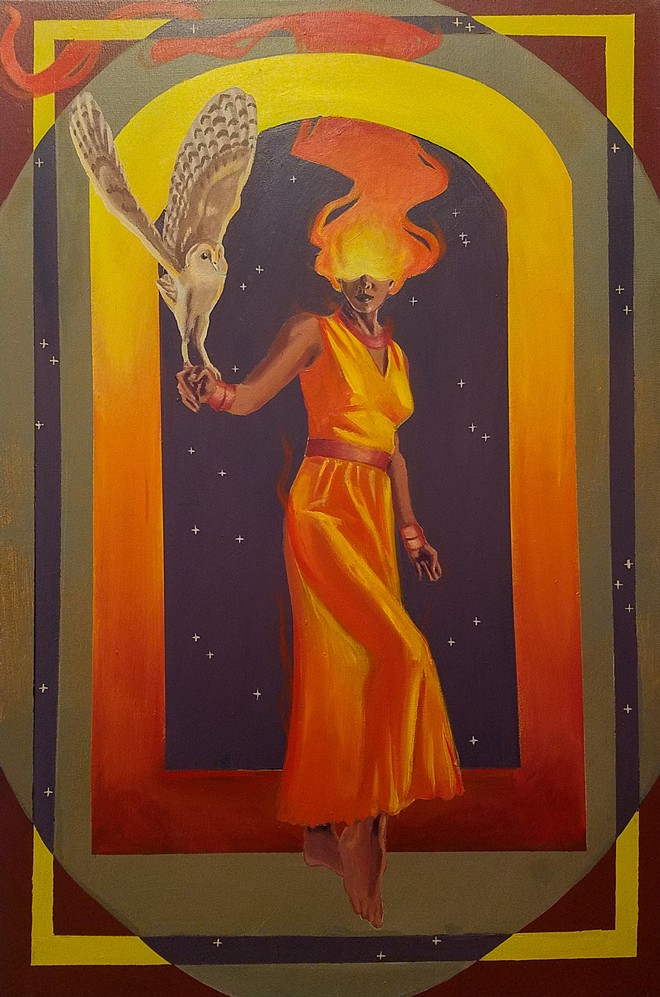 Resident artist and curator Tessa LeBaron invited Ray Rodríguez to present the “Wanderer” exhibition on May 29th at Negative Space Gallery (3820 Superior Ave.), a hidden Asia Town gem that has been called a "true non-profit host for communal exchange."

“Rodríguez’s art is full of mysticism and symbolism. I feel his work to be complimentary to Negative Space as a backdrop for this exhibition," said LeBaron. "We couldn’t be more pleased to represent Ray’s series, he’s a talented artist with a bright future."

As a kid growing up in Puerto Rico, Rodríguez would draw what he calls “chapters of stories.” When he grew up, he studied Art at Pontifical Catholic University in Ponce, Puerto Rico, for two years before dropping out to expand his horizons and move to the United States. He continued his training and education here, receiving a BFA from Kent State University in 2019.

“When I began making this series I didn’t even think it would become a series,” says Rodríguez. “I was just painting so that I wouldn’t focus on any of the negativity that came with isolating and quarantining. As I kept painting the series, it started to feel like a world that I was building. The more I painted, the clearer the world would become, scenes and characters would start revealing themselves in the painting. The title 'Wanderer' came about because that was how it felt, I was exploring my imagination, trying to live in it and escape this one. The series ultimately is a representation of the world I started building while I couldn’t fully participate in ours.”

Rodríguez’s work bewitches the viewer into the scenes he conjures up, inviting one to wander around inside Rodríguez’s head, losing oneself in the ‘surreality’ of his landscapes and characters. You might find yourself on a beach at night on a weird alien planet unwinding with horned creatures, lost in the desert with mysterious grimacing pyramids, or approaching the egress to an otherworldly and magical castle.

In the piece “Foresight,” a bird smokes a pipe, poking its head out from an arched doorway. A waterfall pours out from the entrance onto the plain of an arid desert with cacti baking in the sun. Found in the caves of the islands of Puerto Rico were depictions of the Taíno people smoking pipes along with naturalistic renderings of owls, turtles, frogs, fish and other creatures important to the Taíno, who associated certain animals with specific powers of fecundity, healing, magic and death. The Taíno people of Puerto Rico were massacred, enslaved and infected with disease by Christopher Columbus and his crew, their cultural heritage forever decimated. Perhaps the work is a commentary on this cultural lineage.

Another piece shows a bird gripping in its beak a cable which is tethered to two floating, pill-shaped portals to other dimensions. Earthly power lines and a transformer settle unassumingly in the background. In Rodríguez’s work, you are never quite sure where you are and who or what you might confront, but it very much feels like peering into a scene from the surreal psyche of the artist.

“I have lots of surrealist inspiration, artists like Remedios Varo, Dali, and even more contemporary artists like James Jean and Inka Essenhigh,” says Rodríguez. “What I personally try to focus on is making an image that has emotion, visuals and colors that lure the viewer in. Sometimes I find inspiration in mythology, in the subconscious and in dreams. In the end I hope to paint something that is familiar but strange.”

Many of Rodríguez’s pieces feature renditions of powerful warrior-like women toting swords or birds of prey. “Sorceress” depicts a beautiful, hooded woman with four arms. One wields a staff. Two wield swords. Yet another reaches for her hood to remove it, as if to address an unseen audience with some profundity of speech. In “Enchantress,” a woman with fire for the top half of her face descends from a starry archway. An owl grips her wrist. Owls are known for their paranormal wisdom, regal silence, and fierce intelligence. Often owls represent spiritual influence, wisdom and knowledge in Greece, Rome, and in Celtic mythology. In Africa the owl is associated with witchcraft, wizards and sorcery.

In this depiction, the bird is either about to take flight or is returning to the servitude of its mistress to do her bidding. The woman is regal in her bright orange, flowing garb and fierce with her fiery dome. Is she a myth, a legend, a princess, or a queen? We don’t know for sure but she is a powerful representation of womanhood and evokes a sense of seductive mysticism that the viewer can’t help but to succumb to.

Some of Rodríguez’s favorite characters in fiction are powerful female characters. He explains, "A sword or fire can represent power, especially in fantasy. If I was going to paint women, I wanted them to be powerful, inspiring and magical.”

One can oftentimes find Rodríguez’s work displayed on the walls of Lakewood’s Root Café where he works, and which is known for its caffeinated beverages, locally-sourced ingredients and for being a ‘community clubhouse’ featuring local art, music and events.

“Not only was this last series fun to make, it was therapeutic,” concludes Rodríguez. “All the paintings are very much alive in my head, and it pretty much feels like I’m building a new world on multiple canvases. I’m hopeful to see some of the characters pop up again in some of the future paintings as I would like to expand on the ideas that I explored here.”

“Wanderer” will be on display through June 26th, on which date Negative Space will host a closing reception from 5-8 p.m.