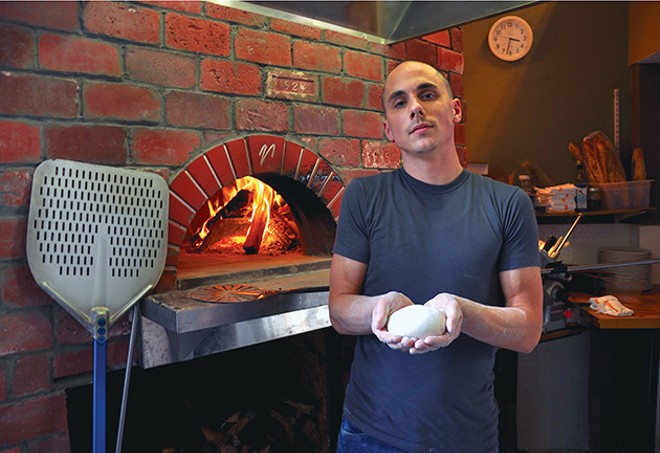 Marc-Aurele Buholzer has been baking pizzas in the same oven for nearly a dozen years, nine as the owner of Vero Pizza (12421 Cedar Rd., 216-229-8383) and two and a half as the chef of its predecessor La Gelateria. Soon, he will be receiving and installing his “dream oven,” an Acunto from Naples. He says that his current wood-burning oven, while clearly more than serviceable, was not created as a true pizza oven. It was only through very intense wood management systems that he was able to get such consistent results from it.

“I push the hell out of her anyway,” he says of his soon-to-be-former oven. “It’s like taking a Fiat around a course that was meant for Ferraris. Now, we have the Ferrari on the way. I’ll definitely have to be light on the peddle at first.”

The new oven clocks in at a whopping 6,000 pounds, more than double the weight of the current one. It will cook pizzas in 60 to 90 seconds as opposed to three to three and a half minutes because of its superior heat retention. But to get the oven into the kitchen located in the rear of the slender space will require some considerable labor. Permits in hand, Buholzer will soon begin the work of shoring up the kitchen floor. When the oven arrives from Italy, it will need to come through the front windows. A staircase that leads to the mezzanine will also need to come down and then be rebuilt.

The timeline is expected to take four to five weeks and require a two- or three-week closure of the restaurant. Until the closure, Vero will be a weekend-only take-out operation. When the dust settles, Vero will open for dine-in service for the first time in more than 15 months. In addition to a full-capacity dining room, there will be an expanded outdoor seating area out front.

Diners should not expect wholesale changes to the menu, says Buholzer.

“We’re going to keep things simple and distilled,” he explains. “We’re going to make sure that every single item on the menu is exactly how I wanted and intended it to be.”

That means no new “meat-lovers” pizzas, but rather lightly topped seasonal pies that allow the flavor and texture of the dough to shine. In fact, Buholzer will likely triple the number of Margherita pizzas that feature different tomato varieties. The pizzas will be bolstered by antipasto dishes like olives, anchovies, vegetables, roasted peppers and charcuterie.

Despite making pizzas in the same small Cleveland Heights kitchen for 12 years, Buholzer remains enthusiastically passionate. His dough continues to evolve and improve with each passing year. His “super-hydrated,” naturally fermented dough, he says, has never been better.

“It’s not easy, but I’m still excited every day when I make it,” he says. “That’s why you see that nice open crumb. It still has a chew, but not the extra chew you see in lower hydrated doughs typical of Neapolitan-style.”

Interestingly, Buholzer says that he will continue selling take-out pizzas after reopening for dine-in business. Until the pandemic, take-out pizza was strictly taboo at Vero.

“I did not think the pizza would be a great candidate for takeout pizza,” he says. “However, the customers who have been ordering our pizzas every single week are our regulars, so I know it’s a value in their life.”