Update: Heart of Gold to Open in Former Plum Space in Ohio City on Monday June 14

Update: Everything is in place for a Monday, June 14th opening for Heart of Gold, says owner Jonah Oryszak. The restaurant will come to life in the former Plum space in Ohio City. We've added the just-released menu to the end of this post. To start, H.O.G. will be lunch and dinner Monday through Saturday but brunch will be added ASAP.

After being closed for the better part of 2020, the Plum in Ohio City was laid to rest earlier this year. Owner Jonah Oryszak announced then that the space would reopen as Heart of Gold (4133 Lorain Ave.), a more casual neighborhood bar and kitchen. That is scheduled to happen on Monday, June 14.

Oryszak says that his primary objective was to open a completely new restaurant that looked and operated differently from the Plum, but that still produced “thoughtfully composed inventive food and drinks.”

Remaining fixtures and finishes are the shimmering white-tile backdrops, custom-made tables and chairs and pink banquette. Gone is the wild wallpaper, bright flooring and color neutrality. Added is a mural painted by artist Jason Look, refinished hardwood floors that add warmth to the space and plenty of dark dusty-blue accents.

“I think we did a lot of things right the first time around, where a lot of things are neutral so it would always be easy to swap out things and change the space without having to completely change everything,” Oryszak says.

The executive chef is Adam Bauer, who has worked at Moxie, Red, Trentina, Greenhouse Tavern and Sawyer’s.

“We’re trying to ride the line between being fast-casual but pushing the flavors and keeping things hyper-seasonal,” he says. “We will keep the core menu items small so we can do as many seasonal specials as possible.”

The menu will feature an approachable roster of salads, green bowls, burgers, sandwiches and entrees like Hungarian-style braised bacon with Ohio corn spoonbread.

“We want to make it a price point that’s affordable, so we can have return customers once or twice a week hopefully,” the chef adds. “There’s nothing over $16.”

Guests will experience a much more casual environment, one where they seat themselves, order food and drinks at the counter and even pick up their own food from the kitchen. The restaurant will be first come, first served, employ no servers and will offer online ordering for easy pick-up. The goal, explains Oryszak, is to eliminate as much overhead as possible, to keep prices down, to push wages up and encourage repeat business.

“What I was interested in was staffing fewer people, paying everybody a little more and setting it up in a way that we wouldn’t have to close again if another pandemic or strain happened,” he says. “By eliminating all those costs and cutting all that fat and still presenting food that will make people excited we can make the food affordable. We’re in an area of town where we can’t survive on tourist traffic; we need to be the neighborhood place where people can eat at every single day.”

“We’re trying to adapt to the new culinary landscape like anybody else,” adds chef Bauer. “I don’t think what we’re doing is 100-percent different from what you’re seeing all over the country. We’re all trying to survive in the present climate.” 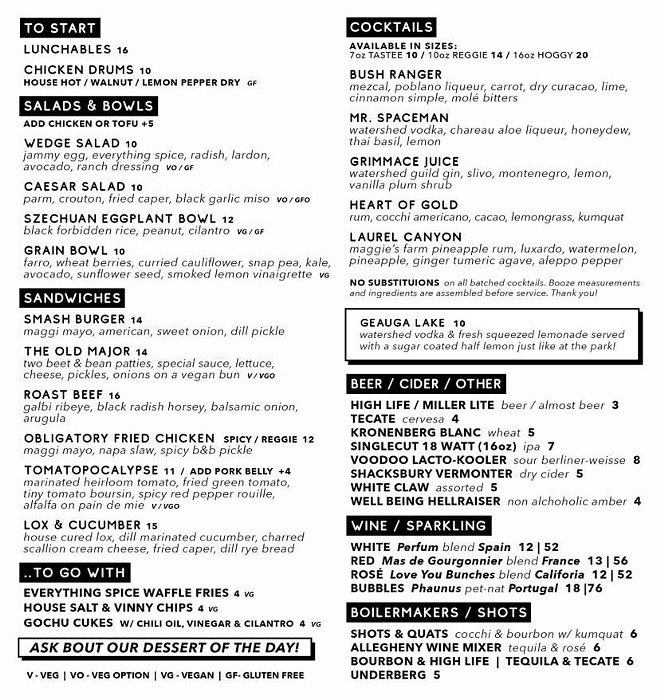