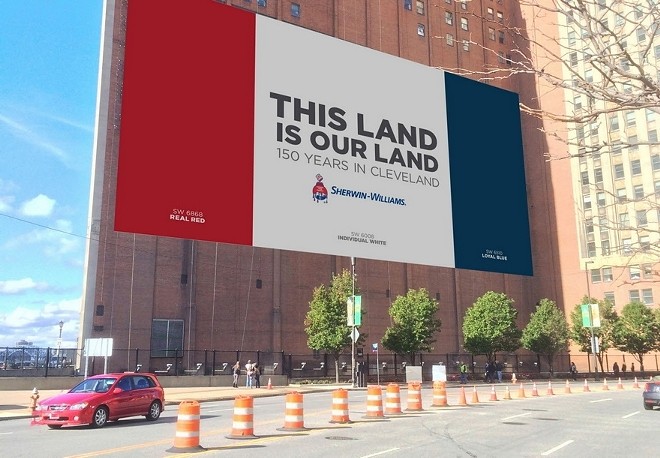 State legislators on the Ohio Controlling Board Monday approved a $600,000 grant to the City of Brecksville that will pay for road improvements near the new Sherwin Williams research and development campus there.

These Roadwork Development Grants are one of Ohio's countless tools for supporting the attraction and expansion of businesses in the state. Another grant recipient approved Monday was Amazon, a corporation famously in need of taxpayer dollars in order to survive and expand. (Amazon's $1.5 million roadwork grant will go toward a road expansion project outside its new warehouse in the Dayton area.)

According to the project description in the Sherwin Williams grant application, the Brecksville roadwork will consist of "the full depth replacement of the existing concrete roadway pavement of Miller Road between Southpointe Parkway and Brecksville Road."

"The increased traffic volumes from the proposed Sherwin Williams headquarters [in downtown Cleveland] will accelerate the pavement degradation and create safety concerns," it explained. "A new pavement surface will avoid this."

The grant is on top of millions of dollars in public subsidies previously greenlit by the cities of Cleveland and Brecksville and the state of Ohio for the paint and coatings giant. These subsidies are premised on the attraction of 400 new jobs and the crushing fear that Sherwin Williams and its current 3,000+ jobs might abandon Northeast Ohio for juicier public subsidies elsewhere.

Last month, voters in Brecksville overwhelmingly approved a zoning change that will facilitate construction of Sherwin Williams' R&D compound, a 500,000 square-foot facility that's currently scheduled to be operational by 2024.