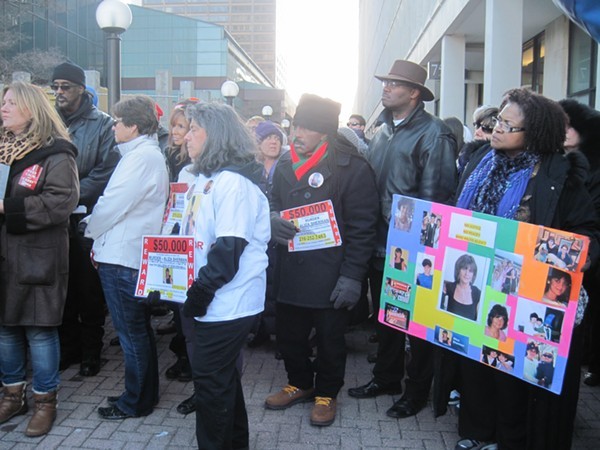 Family and friends of Aliza Sherman gathered on March 24th of this year outside 75 Erieview Plaza in downtown Cleveland for a vigil to mark the eighth anniversary of her murder, which remains unsolved.

“While it wasn’t perfect, going down there, as much as it is extremely difficult, it is important to stand there and go where it happened to remind everyone,” Sherman's daughter Jennifer told the Cleveland Jewish News. “I made a commitment to my mom that we would go down there every year to advocate for justice. It was a nice experience to still be able to have a lot of our support system with us.”

Sherman, who was in the midst of a messy divorce at the time, had gone to the building on March 24, 2013, to meet her attorney, who sent messages to her that day indicating he was in the office. Investigators found shortly after that he wasn't. (He pleaded guilty to lying to investigators in the case.) Sherman was stabbed in broad daylight by a hooded attacker who was caught on videotape but never identified.

While a sizable reward was offered and the family, along with police, pleaded for anyone with information to come forward, no concrete progress has been made on the case.

“There have been no updates, no movement, in her case,” Jennifer told NBC's Dateline earlier this year. “So why not hand it off to a fresh set of eyes or someone who has more resources to dedicate to the investigation?”

Sherman's family will finally get their wish.

The city of Cleveland announced last night that Sherman's case is one of three it has asked the Ohio Attorney General's Bureau of Criminal Investigation's Cold Case Unit to assist on. (The others are the unsolved murders of Stephen Halton in 2014 and Ryan Dixon in 2016.)