Savage Love: I Found My Neighbor's OnlyFans Account. Am I a Creep? 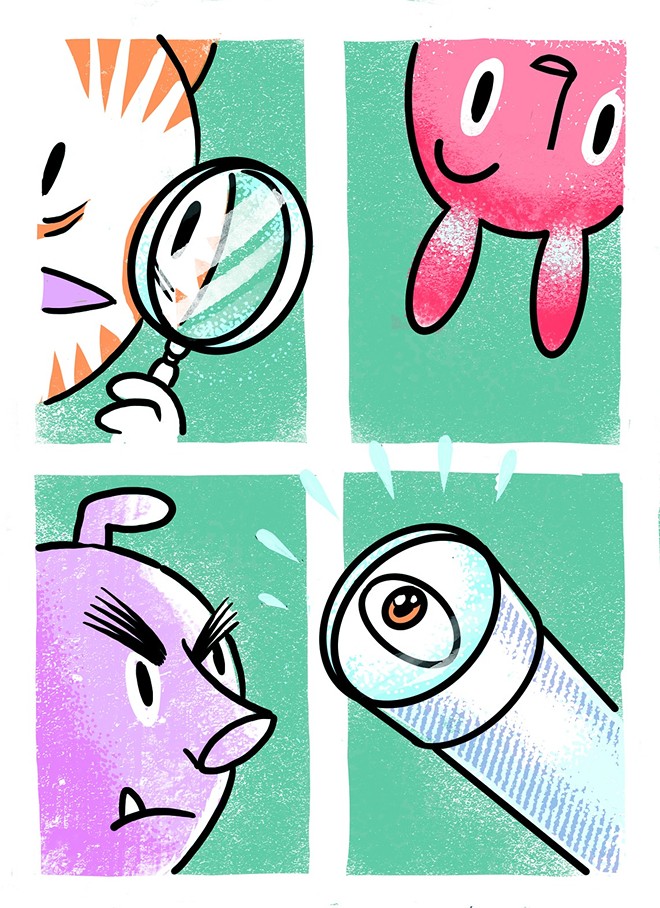 I'm a 40-year-old gay male. I live in a big city, in a dense neighborhood. While I've been working from home during COVID, I've been sitting at my kitchen table facing a big window. Across the alley is an apartment with a deck. At one point, I noticed a cute, young, muscular guy outside. I ran into this guy a few weeks later at a neighborhood liquor store. While I was looking at porn one night I was stunned to find his nudes and a link to his OnlyFans. I instantly subscribed, went through everything, including his gay sex vids, and, yeah, I came. I tipped him and put in a few comments about what kind of content he should put up next. He took my suggestions and I tipped him again. About a week ago he knocked on my door and asked if I had jumper cables. That night, I found a six pack of beer by my door and a note from him thanking me for my help. I got back on his page and came so hard as I drank his beer. I don't want to have sex with this guy — he's not really my type and he's too young. I do get off on knowing that I can pull up his dick pics whenever I want and that he will do anything for a few bucks. But I question if I'm crossing a line. He obviously doesn't know his neighbor is jerking off to him and probably wants to keep his porn life separate from his private life. Should I feel gross about this?

You know something about your neighbor that your neighbor doesn't know you know about him, RW, and knowledge is power and having power over someone can be sexy. Power imbalances are such a turn-on that people will manufacture them in their absence. For some people having less power (or giving up the power they have) is a turn-on; for others having more power (or being granted more power) is a turn-on. So long as everything is consensual and no one is being exploited or exploitative, RW, no one has to feel gross about it. (Pease note: making sure no one is being exploited during consensual power play or during consensual sex in the presence of a significant power imbalance requires thoughtful self-scrutiny, solid communication skills, and a willingness to negotiate and renegotiate.)

But even if your hot neighbor feels no shame about the work he does — and here's hoping he doesn't because there's nothing shameful about it — your hot neighbor may not care to be reminded that his neighbors could be jerking off to him. (Or have it confirmed that at least one is.) If you were to get to know him better — surely you'll say hello the next time you see him at the liquor store — and you became acquaintances and he brought up what he does for a living, RW, then you should tell him you're a subscriber. But until that point err on the side of keeping your mouth shut and your wallet open. You're not endorsing or reinforcing shame about making porn by being discreet; instead you're making a reasonable assumption about a boundary someone in his position is very likely to have and respecting that assumed boundary.

—Where That Mouth Has Been

I am a newly polyamorous woman in my late 30s. I am part of a triad, which is so fun and amazing, and I also have a boyfriend. The boyfriend is why I am writing. We have some serious NRE and have been spending a lot of time together. I recently met his girlfriend of 1.5 years and it derailed things for me. He has been sharing every detail of our relationship with her. She knew everything about me, every private joke we shared, and so much about our intimacy that it made me incredibly uncomfortable. And I knew next to nothing about her and it was quite awkward for me. It turns out this was a boundary that I didn't know I had. I feel betrayed and like there was a secret voyeur in our relationship. I am really into this guy but I don't know how to move forward. How can I feel like we are sharing something special when he goes back to his other partner and tells her everything? He said he could adjust his behavior but I don't want to make someone change or have to trust that he's not reporting everything back to her. Is this something I just have to deal with in polyamorous relationships?

Is there a way forward if you want to stay together? There could be. It would help to know why he was treating you differently. Have you asked? It could be that his other girlfriend wants to hear the details about the other people he dates — maybe hearing the details turns her on, maybe hearing the details makes her feel more secure, maybe it's a little bit of both — and he too thoughtless or too scared or too inexperienced to ask what you wanted. If he's apologized to you and explained the differing treatment — and if the apology seemed sincere and the explanation was satisfactory — you could let him to adjust behavior to make you feel more comfortable and then give him enough time to prove that he has changed... if you'll allow him to change.

And finally, NPP, this is something you're gonna have to get used to as you continue to explore polyamory. Most polyamorous couples err on the side of sharing too much rather than too little. Some poly people only want a rough outline about their partner's other partners, NPP, but some want to hear every last detail. If you don't want someone you're dating to share intimate details with their other partner(s), you'll have to ask them not to share.