Wendy Park Bridge, Connecting Near West Side to Whiskey Island, is Now Open 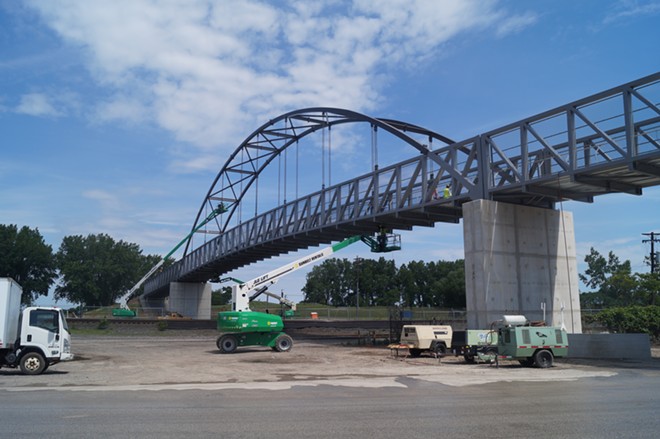 After a ribbon-cutting ceremony this morning at 11.a.m, the Wendy Park Bridge connecting the Flats West Bank to Wendy Park will now open to cyclists and pedestrians.

The $6 million bridge project, begun in 2019 by the Cleveland Metroparks, is one of several trail infrastructure projects opening in recent weeks. Last month, the Redline Greenway opened to the public. And earlier this month, the northernmost section of the Towpath Trail, primarily in Tremont, debuted as well.

Cleveland.com's Steve Litt reported last week that Wendy Park itself was an idea birthed by Cleveland businessman and Metroparks Commissioner Dan Moore. Moore personally donated $3 million to the bridge project through the Wendy Moore foundation, named for his daughter who died tragically from a head injury sustained in a skiing accident at age 29.

The 500-foot bridge crosses the Norfolk-Southern lakefront rail lines and dramatically shortens a bicycle trip from the near west side to Whiskey Island. Previously, cyclists had to bike to Edgewater Park (entrance at W. 65th Street) and then bike back east to Whiskey Island and Wendy Park. The Whiskey Island Connector Trail, which will connect Edgewater to Whiskey Island, is also currently under construction.

Finishing touches on the bridge, including landscaping, can be expected soon. Work crews have been working diligently the past few days to complete the project by the Thursday opening.

See related PDF WendyParkBridgeMap.pdf
***
Sign up for Scene's weekly newsletters to get the latest on Cleveland news, things to do and places to eat delivered right to your inbox.