SaferCLE Initiative Fails to Get Required Signatures, Has 15 Days to Save Ballot Measure 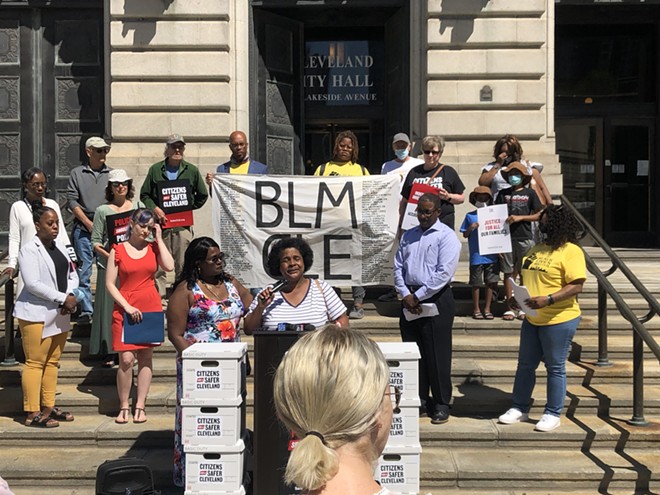 A grassroots coalition advocating for greater civilian oversight of the police failed to reach the required number of signatures in order for its initiative to appear on the November ballot, the Cuyahoga County Board of Elections announced Friday.

Citizens for a Safer Cleveland submitted nearly 13,000 signatures last week, of which more than half were deemed invalid. In a statement, the group said they were unsure of the reasons for the discrepancy — they had announced that they'd collected more than 15,000 total signatures — and said that they were prepared to gather more if necessary.

"We are confident that despite this setback, voters will have the opportunity to vote on real police accountability and community oversight this fall," the group said in a statement. "We remain deeply committed to achieving real police accountability and community oversight in Cleveland. Clevelanders deserve fair and independent investigations of police misconduct, and we believe in the power of this initiative to enact real change."

A total of 6,270 signatures are required to make the ballot. Currently, Citizens for a Safer Cleveland has 5,886. According to the BOE, the group has 15 days to gather the remaining 384.

The proposed ballot initiative would amend the city of Cleveland's charter to create stronger civilian oversight of the division of police. It includes strengthening the powers and resources of the civilian review board and eliminating the situation where the chief of police or public safety director can disregard that body's disciplinary recommendations. It would also automatically make termination the presumed disciplinary response for racist, sexist or other bigoted conduct or language by officers on the job.

Last week, Mayoral candidate Dennis Kucinich came out in strong opposition to the measure, arguing that it would give an unelected commission "vast, unprecedented power that, in some instances, would constitute legal supremacy over the Mayor, the entire Executive Branch, and even the City Council." It is the job of the mayor and city council to develop and implement police reforms, he argued. He said the fact that the mayor and city council members were elected made them more accountable to the people.

“This charter amendment strips elected officials of the powers, the responsibilities, and the accountability they should have to serve the people of this city,” Kucinich said. “I doubt very seriously if anyone in government or the media has thoroughly read and understands what this charter change would do to local government. It must be defeated and defeated by a wide margin. Then the community must come together to begin the serious work of fulfillment of the federal Consent Decree, the implementation of workable police oversight and the beginning of new crime-fighting strategies to make our city streets safe."