Restaurant at Westin Downtown to Reopen this Friday, But Not As Urban Farmer 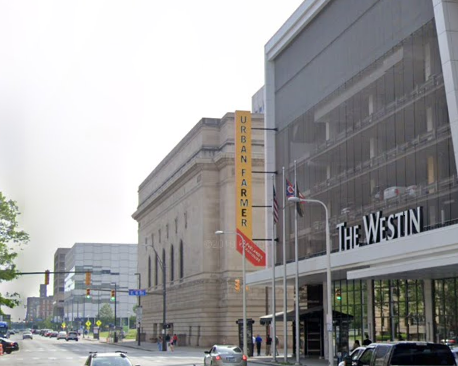 The Westin Cleveland closed last March, as did Urban Farmer restaurant located on the main floor of the property. The hotel reopened this past May, but the restaurant did not. That had less to do with the pandemic than it did with the legal issues engulfing the ownership of the hotel, which is being investigated by the FBI for money laundering. The hotel has been placed into receivership and will either go into foreclosure or be sold to new ownership.

“Because of that uncertainty we’ve opted not to open up Urban Farmer,” explains general manager Tim Meyer. “That was the decision by Sage Hospitality, which is the management company. On the flipside of that: as a general manager that works for Sage and represents the owners, we’ve come to an agreement that I have guests that I have to take care of.”

Therefore, come this Friday, the restaurant will reopen to both guests of the hotel and the general public. It just won’t be called Urban Farmer.

Former banquet chef Jacob Altemus has been brought in as executive chef of the new Not Urban Farmer, which is being billed simply as “the restaurant at the Westin” for now.

“The bad news is that it sounds really bad in the press,” says Meyer. “The good news is that we’re in the best place we’ve been in well over a year.”

Meyer says that the future of Urban Farmer will better come into view within the next 90 days.

Following the publication of the original article, a representative from Sage Restaurant Concepts called to add some clarification on the topic.

"We are not reopening Urban Farmer yet due to resource and staffing challenges," explains Heather Dratler, VP of Marketing and Brand Integrity. "We’re waiting to reopen this restaurant until we can do it the right way, do the brand justice and bring that same Urban Farmer experience that the Cleveland community knows and loves. Until we’re able to do that, we’re not going to reopen the restaurant. We definitely have plans to reopen Urban Farmer in the future, we just don’t have a concrete timeline."

In the meantime, Sage Hotel Management, which manages the hotel, is operating a temporary pop-up concept in the Urban Farmer space called The Kitchen at the Westin Cleveland that serves American cuisine like salads, sandwiches, steaks and seafood, adds Dratler. “Definitely not Not Urban Farmer," she says.