The Sleepy Rooster Is a Great Start to the Day, Whenever That Happens to Be For You 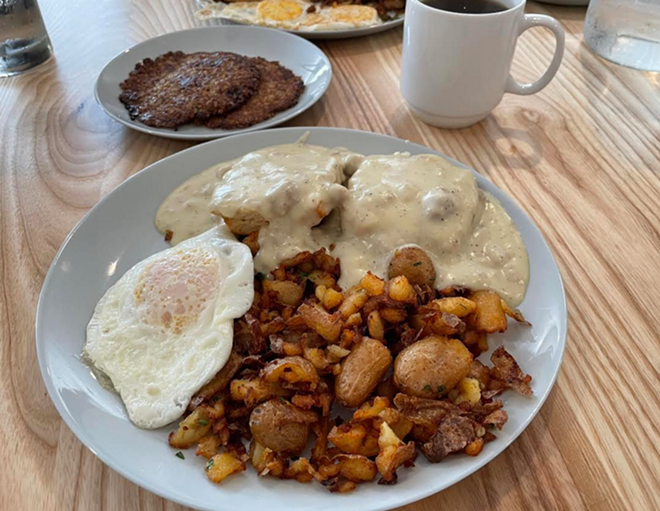 The prospect of weekend breakfast in South Russell seemed as realistic as picking up the piano as an adult. As much as I wanted to check out Sleepy Rooster, which opened this past winter, I am too much of a “sleepy rooster” to manage a Saturday expedition that requires an early start. And given that the night which preceded it was a characteristically late one, the odds grew slimmer by the hour.

True to my nature, all we could muster was a late-morning departure. When we pulled up to the restaurant, it was approaching 11 a.m. and there was a line spilling out the front door. But when we checked in with the host to inquire about the likelihood of success, she put our minds to ease by muttering a late-riser’s three favorite words: breakfast all day. Better still, the wait would be only 20 minutes and there was a farmer’s market taking place directly across the street to pass the time.

I’m not sure what the strip-mall space looked like before Craig and Sarah Fitzgerald grabbed the keys, but I am certain it didn’t look like this. Nine months of work have netted a room that feels perfectly suited to easing people into their days, but also buoying them across the sluggish noontime hours. It’s light and bright without being glaring. It’s minimal and modern without being cold. And guests aren’t packed in like anchovies as is the case at many diners. A lengthy bar facing the open kitchen gives singles and a doubles a convenient place to land and some live entertainment to boot.

For decades now, we’ve been witness to “upscale” versions of comfort food, of street food, of deli food. The trick is to elevate the genre without surrendering everything we loved about the food in the first place. That tightrope walk feels even more precarious when we’re talking breakfast and brunch. Mess with it too much and you risk alienating the diehards. Craig seems to know when and how hard to push the peddle and when and where to coast. His secret formula isn’t a secret at all: great ingredients, proper technique. Leave the bags and boxes to the Denny’s of the world and make the darn things yourself. Of course, it helps to be a culinary school grad and veteran of fine dining restaurants, which the chef is.

Nothing says rise and shine like fresh-baked biscuits, and at Sleepy Rooster they pop up with welcome frequency. They serve as the chassis to a classic breakfast sandwich with egg, cheese and meat. They provide a sturdy base to the house benedict, twin towers shellacked with house-made hollandaise. But they really shine in the biscuits and gravy ($11) where those fluffy rolls are smothered in peppery sausage gravy, which seeps into the crispy home fries. Those spuds happen to be the perfect mix of creamy half rounds and crispy-crunchy bits. The kitchen also makes a version of that savory gravy with mushrooms in place of the ground meat.

Fitzgerald kicks up a typical hash and eggs ($13) with a prodigious amount of chorizo, which manages to be aggressively spiced without going overboard. In typical hash fashion, the meat is mixed with potatoes and onions, capped off with eggs your way and a side of toast. Ask for hot sauce here and you’ll receive a ramekin of the house heater, a Buffalo-style brew that adds a pleasant tang. I’m not sure how the country fried ribeye steak escaped my view, but I’m dealing with a good bit of regret now that I see it on the menu.

In place of wimpy sandwich bread, the avocado toast ($9) is built atop grilled French bread sliced on the bias. The ripe flesh is thinly sliced, not mashed, and lightly seasoned with olive oil, sea salt and black pepper. Sleepy Rooster is one of the only local restaurants to make and serve goetta, the German breakfast dish made from ground meat, oats and spices. It has a comforting nutty taste and texture that goes great with eggs and toast, but also on its own as a side ($4).

My next visit will be pushed back a little later in the day so I can enjoy Fitzgerald’s soups, salads and sandwiches. Lunch ushers in dishes like French onion soup, mixed green and goat cheese salad, fried chicken on a biscuit, pork belly BLTs, fried bologna and onions, and grilled cheese with bacon, brie and jam. With an all-star roster like that, it’s tough to decide what to leave on the bench.