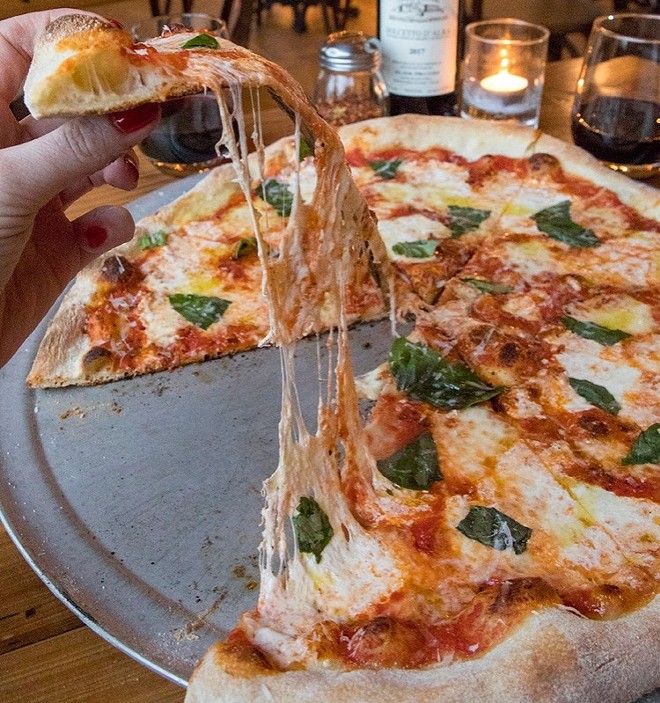 Il Rione (1303 W. 65th St., 216-282-1451), the four-year-old Gordon Square pizzeria, has been closed for dine-in service since March of 2020, focusing instead on carryout and curbside business. That will change come Tuesday, July 6, when the restaurant finally resumes full-service dining. And when it does, it will do so with a new look and layout.

Since closing for dine-in service, owners Brian Holleran and Brian Moss have been making improvements to the inside and outside of the building. They added a second dining room in a space directly behind the current bar that connects to the main dining room via a large opening in the hallway. They’ve also carved out a new back patio in the rear of the property, where a bar and seating will provide diners waiting for a table a place to wait on-site as opposed to going elsewhere. On rainy evenings, the second dining room will serve as the waiting area and lounge.

To start, says Holleran, neither the patio nor the second dining room will be used for eating.

“We’re going to keep the same capacity,” he says. “I’d hate to open everything up and then not deliver and then have to scale back. I’d hate to overpromise and underdeliver.”

Another major improvement sits squarely in the open kitchen. Moss and Holleran traded in their aging Blodgett oven for a new triple-deck PizzaMaster. Not only does the state-of-the-art electric oven accommodate more pies, it bakes them faster and more consistently.

“Our old oven just doesn’t get hot,” states Holleran. “You can crank it to like 650 and when you put six pies in that oven, your temperature goes down to like 500 degrees. That’s lower than the oven in my house. So we decided to just bite the bullet and get new ovens. These are like Ferraris. Even when you have everything slammed in there the thermostat adjusts itself so that it’s always going to be the exact temperature or thereabout.”

The goal, he adds, is to open, get up to speed and eventually increase dining capacity. The trick is to do so without sacrificing quality and service, but also the atmosphere that diners have come to love.

“We want to make it nice, make it cool, but also not lose the sexy vibe and buzz and charm of the space,” Holleran adds. “That’s the thing I think is great about our place – this kind of cozy, intimate, cool hang spot. If we make it this big, huge thing, it changes. I don’t want to do that.”