Jake Kelly’s Latest Comic, “In The New Era,” Digs Into Cleveland’s Burlesque Underground During the 1970s 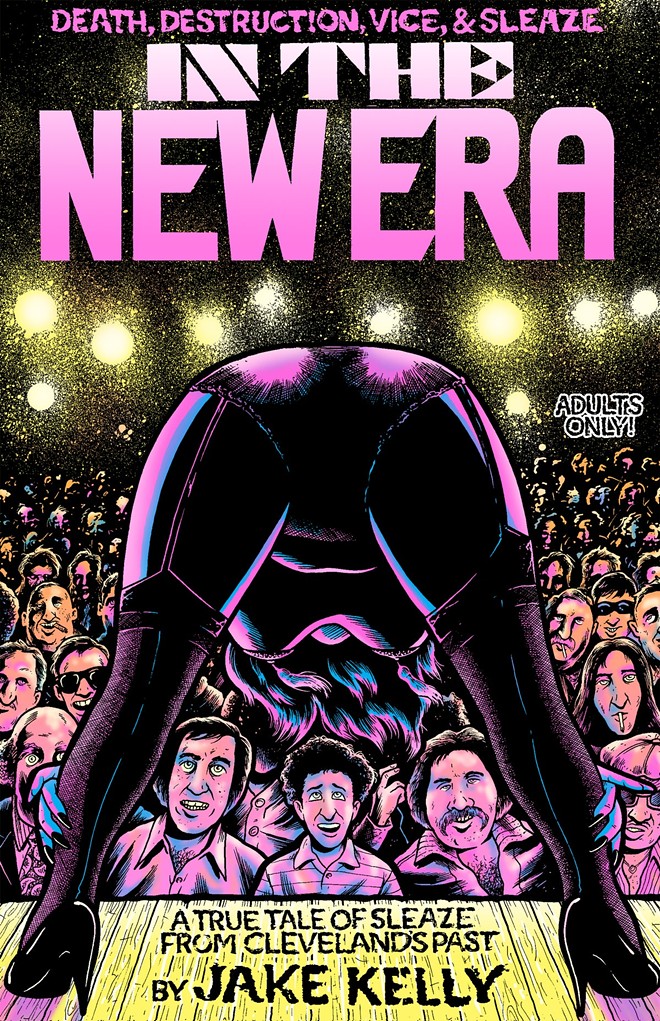 “In The New Era” follows the enigmatic and scandalous story of Cleveland’s burlesque underground with the star act Fifi Fondue and her pet gorilla.

“The series is called death, destruction, vice, and sleaze, and there is an abundance of vice and sleaze out there,” says Kelly. “It's a huge part of the story I'm telling. This is the first issue to deal in that area directly, and the story of the New Era Burlesk is as good a place as any to start. This was a crazy place, the 'wild west' as one interview subject put it, and I'm aiming to let the modern reader know just how crazy it was.”

The issue is illustrated in mostly black and white with well-crafted line work and lettering with all the detail and meticulous precision we’ve come to expect from Kelly's work. The cover art is colored and the layout for the comic is by another well respected Cleveland illustrator, John G.

This is the third addition to this saga after  “Doomsday Map” and "Shadows Will Fall.” In this issue the reader is exposed to a brief historical outline of Cleveland’s seedy ‘Short Vincent’ neighborhood, where clips of peep shows could be seen by dropping some ‘scratch’ into a coin machine in the early 20th century, and follows through the progression into lewd acts of degradation as we move into the early 1970s when films like “Deep Throat,” “Behind the Green Door,” and “The Devil in Miss Jones” were a new titillating experience growing in popular acceptance. The narrator sarcastically toys with the reader about the growing popularity of these types of films and pornography in general by commenting three times in the book, “Couple’s went, it was a night out.”

It’s interesting to note that this is the first issue where Kelly was able to track down people who worked at these places to get a firsthand account of what it was like, and the stories these subjects reveal to us in the comic are certainly crude.

To sum it up, it’s pretty dark.

It is important to remember, however, that although Kelly is forced to take some liberties as far how the scenes and characters are portrayed, for the most part this is a historical account brought to life and sewn together from thorough research.

“Look, there was prostitution and who knows what else going on on this block, and they were clearly operating an underground economy outside of the law,” says Kelly. “When you’re on the fringes, on the margins, outside of the law, violence is definitely present. Add to that, you've got people coming from the outside world into this world, this underbelly, and conflict might be inevitable, between these people from the outside world who believe there are rules and people who know there aren't.”

Someone who could not have been more immersed in this underground economy is Fifi Fondue. It seems she was a Czech woman who made it over to the States and became a fairly popular act in these types of clubs, touring around the country and developing a following much like an underground punk bands.

“I mean, the song is actually about The New Era, explicitly, so it's sort of a no brainer,” says Kelly. “I really like that punk bands would write songs about things that were happening, in their towns, at the time. Almost has the quality of folk-history, and there's something really cool about that. They wrote the song in the days of mayor Perk's campaigns against obscenity, and Perk pokes his head up for the first time in the series this issue, and he will most certainly be back.”

Kelly’s research informed him that after the release of King Kong, two varieties of gorilla burlesque performances manifested: In one, a man in a suit would jump around, capture the dancer, and carry her off stage; in the second version, a solo woman danced around with a stuffed puppet.

“Fifi's act was from the latter school of gorilla burlesque,” says Kelly. This version with the stuffed gorilla had a financial benefit as Fondue wouldn’t have to share her spoils with the puppet. According to a man by the name of David Klein who saw Fondue perform, she did things to the gorilla which one will have to read the comic to discover.

“I'm happy with the way things are progressing,” says Kelly. “You know, writing and drawing a comic is a huge undertaking, and adding massive amounts of historical research into the equation just ups the amount of time it takes…The next issue is a pretty wide-ranging, swirling vortex of things. It involves LSD, the Brotherhood of Eternal Love, biker gangs, and a double murder. I'm finishing up the research and writing it now, and hope to have it out in the fall. It's gonna’ be a crazy, trippy, far out story.”

On Saturday, August 14th, Kelly will be doing two separate events. From 10 a.m. to 2 p.m. he’ll be at Carol and John's Comics doing free drawings for people and selling comics, and then from 3 p.m. to 8 p.m. he'll be at Superscript Comics doing the same.