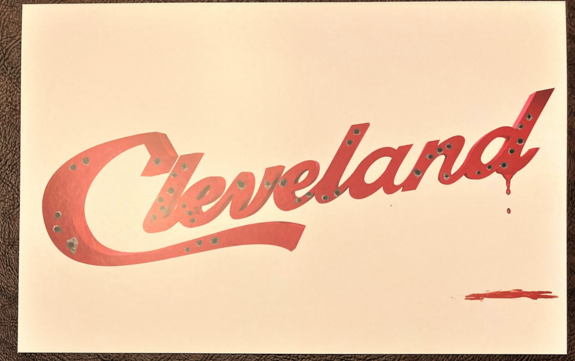 Mayoral candidate Dennis Kucinich will not continue to use the image of a bleeding, bullet-ridden script Cleveland sign in campaign materials, a spokesman announced Wednesday morning.

The Kucinich campaign has communicated as much to Destination Cleveland, the local convention and visitors bureau, which naturally took exception to the image's use in a controversial campaign mailer last week.

The CLEVELAND® script is a cherished emblem of our city and its people. It’s become a symbol of immense pride for the Cleveland community. This July 4th Weekend, consider visiting one of the six sign locations around Cleveland to celebrate your love of our city. #ThisisCLE pic.twitter.com/6tga8n2ZpD

As it was tweeting out the above, Destination Cleveland's legal team sent the Kucinich campaign a letter, advising that the script Cleveland image was a registered trademark, and that the organization objected to its graphic repurposing by Kucinich "to represent an apparent siege of crime in our great city"

The Kucinich campaign said it respectfully disagreed with Destination Cleveland's letter, but said the image effectively made its point and that the campaign had no further plan for its use.

"The campaign will continue to aggressively address the intolerable incidence of violent crime in our city," the letter read. "And, if Mr. Kucinich is successful in being elected Mayor and implementing the public safety strategies and policies that he has laid out, the results will contribute significantly to [Destination Cleveland's] chartered mission to promote our city as an exciting, inviting, and safe place to visit."

Kucinich continues to make violence central to his election strategy.