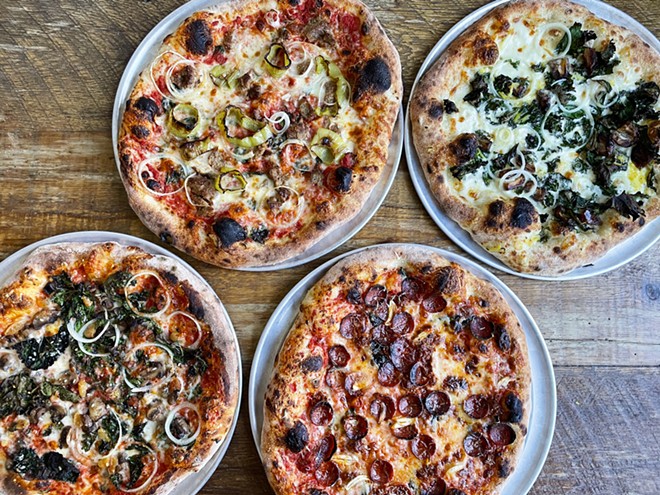 When Ben Bebenroth announced the closure of his farm-to-table bistro Spice Kitchen at the outset of the pandemic, the chef vowed going forward to avoid the pitfalls of fine dining. Instead, he and the Spice Hospitality brand forged ahead with events and catering while unveiling Keep The Change Kitchen Collective, a virtual food hall that launched with three distinct concepts for curbside pickup and delivery.

Keep the Change now boasts four menus – Winner Winner Spatchcockery, Winner Winner Wing Shop, Leif and Woo! Noods & Rice – but recent shoppers might have noticed the beginnings of another. Each Friday evening during the past two months, a fifth option has been appearing on the virtual menu board: Boom’s Pizza.

These “doughball Fridays” are more than a mere pizza pop-up; they are the R&D for a future standalone concept that Spice Hospitality intends to roll out in the coming months. Named after Bebenroth’s grandfather, Boom’s Pizza will be a “fun, casual neighborhood pizza joint” starring quality ingredients, technique and execution.

“It’s been a very nice luxury to have the ability to just pop this up and test stuff out,” says Jonathan Bennett, Chief Culinary Officer.

Each of the 500 or so pizzas sold during the past eight weeks has been another opportunity to test, tweak and attempt to perfect everything from the dough to the bake to the topping combinations. Bennett estimates that the team has worked its way through 50 or so iterations of the dough recipe, which employs a long, slow fermentation to develop the flavor while improving trav-ability.

“It’s such a deep science,” Bebenroth says of the dough work. “If either one of us was satisfied with mediocrity, we probably would have had two stores open by now.”

The unicorn – a pizza that tastes great out of the oven, but also out of the box – lands somewhere between Neapolitan and New York, notes Bennett.

“There’s no pizza in the world that doesn’t taste best straight out of the oven,” Bennett says. “But 80-percent will be to-go or delivery, so if it doesn’t travel well, we should not be doing it.”

These pop-ups also help nail down other aspects of the future business, such as baking equipment, kitchen layout and ingredient lists. In the meantime, the company is exploring possible store locations. They have a few spots picked out, but nothing is signed yet.

“We’re looking on the west side,” says Bennett. “We’re trying to find something that has that built-in population of people that appreciate local food and local businesses instead of commodity products.”

When Boom’s Pizza does open its first shop, it will showcase all of the pandemic-era elements that diners have come to love and expect from their favorite businesses, namely seamless mobile ordering, pick-up and delivery. The store will be counter service-driven, but will have seating for dine-in enjoyment. Salads, apps and beer and wine will likely be available.

Bebenroth says the goal is to open the first shop before the end of the year, but that’s just the beginning. The long-term goal is to expand to all major markets in Ohio, followed by strategic national expansion.

“We’re not interested in doing anything that isn’t scalable,” he says.