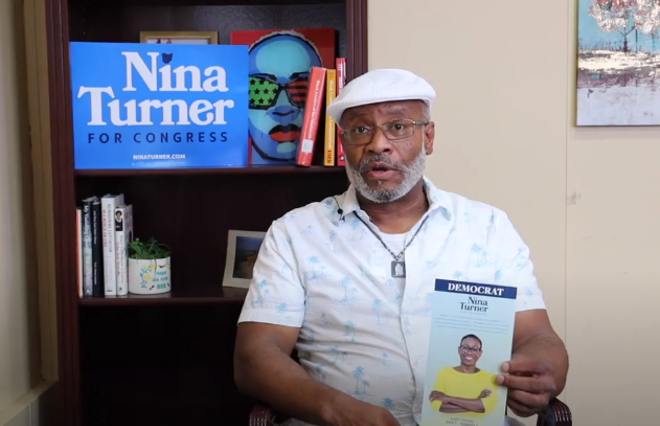 Garfield Heights Councilman Michael Dudley has released a video in coordination with the Nina Turner campaign endorsing Turner for the OH-11 congressional seat.

Dudley's endorsement, which he said is one of fewer than 10 he has made in 14 years of elected office, is also a repudiation of Shontel Brown, whom he said erroneously included him on a list of more than 100 local elected officials supporting her.

"You saw my name out there supposedly endorsing another candidate," Dudley said in the video. "That is absolutely not true. I haven't signed nothing or endorsed any other candidate. My endorsement clearly goes to Nina Turner."

Dudley said that the 2021 special election was no time to send a candidate to Washington for "on-the-job training," presumably a reference to Brown's perceived lack of experience. And he cited both Turner's legislative track record and his personal relationship with her to promote her candidacy in Garfield Heights and beyond.

When reached by Scene, Dudley said he was unsure how his name appeared on Brown's website and other campaign literature. He was named as one of more than 50 county and city councilpeople in the 11th district who'd endorsed Brown.

Dudley said he had been sent an endorsement request by the Brown campaign via email and was solicited by text message as well, but that he never completed the form or responded to either request with his permission to use his name. He said a friend of his, a pastor in Maple Heights, first alerted him that his name and image were being used on Brown's materials.

"I've endorsed less than 10 people," Dudley reiterated to Scene. "I'm not an endorser of just anybody. I'm selective about who carries my name. Nina's someone I have no problem using my name. She's a fighter."

The Turner campaign was naturally keen to promote Dudley's endorsement, especially as Brown has gained momentum in recent weeks with hundreds of thousands of dollars in support from the Democratic Majority for Israel (DMFI) PAC, who funded flagrantly false mailers smearing Turner this weekend.

Nina Turner For Us spokesperson Kara Turrentine wrote in a statement to Scene that the campaign was grateful for Councilman Dudley’s endorsement.

"This campaign is about building a diverse coalition of current and former leaders across the Democratic spectrum who share Nina Turner’s mission of service to the people and vision for an America as good as its promise," she said. "We look forward to joining with these elected leaders to create real change for Ohioans once Nina Turner is elected to Congress.”

The Shontel Brown campaign has not yet responded to questions from Scene about how Dudley ended up on their endorsement list.