A Fairy Tale Sticky With Sentiment: "BKLYN The Musical' Is a Mixed Bag at Porthouse 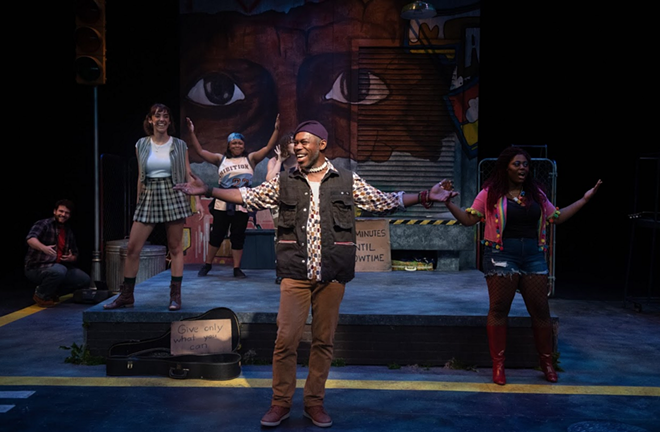 Who doesn't like fairy tales? Those stories about Little Red Riding Hood and Cinderella were loaded with frights, danger and pain that resolved into useful morals we could pack away and deploy in real life.

So the idea of an urban fairy tale might possess a unique sort of magic, which BKLYN The Musical attempts to capture at Porthouse Theatre. The creators Mark Schoenfeld and Barri McPherson have done a decent job of envisioning a gaggle of street performers who are eager to share the story of a girl named Brooklyn, who was born in France with a song in her heart but who is soon left without parents—her mother Faith (Olivia Billings) commits suicide and her drug-addicted father Taylor, a ravaged vet of the Vietnam War, disappears. Plucky Brooklyn, who was named after her father's hometown New York City borough, sings her way to seemingly instant fame and eventually heads off to America to try and find her father.

Unlike the classic fairy tales, which save their teaching for the end of the story, Schoenfeld and McPherson infuse the entire play with treacly poetry and feel-good aphorisms that stop just short of the gag reflex. Consider that the first two songs are titled "Heart Behind These Hands" and "Christmas Makes Me Cry" and you get a sense of what is in store. This show doesn't wear its emotions on its sleeve, it wraps itself in drippy feelings like an oversized and excessively embroidered caftan.

The whole piece is held together by a narrator of sorts, an older fellow named Streetsinger. In that role Miguel Osborne uses his ample charm and sultry, soulful vocals to spin out the play-within-a-play, stepping in frequently to offer commentary and wisdom.

Once the story moves to New York (don't blink, it happens fast) there is a trumped-up conflict between the now famous Brooklyn and the sassy and supposedly cruel Black singing diva Paradice, who named herself that after the foam dice she had as a kid. Despite the valiant efforts of Moriah Cary, Paradice never quite emerges as the villain this play desperately needs since she is forced by Schoenfeld and McPherson to sing out her vulnerabilities, such as in her signature song "Raven" ("You see beneath this suit of armor/I still bleed!"). Um, yeah, thanks for telling us. In addition, the climactic sing-off between Brooklyn and Paradice at Madison Square Garden lands with a thud because the playwrights don't provide a structure for this potentially galvanizing showdown.

However, one saving grace is that those same creators have fashioned some lively original tunes to accompany their saccharine lyrics, composing a few better-than-average numbers in styles ranging from disco to Motown. This music is played crisply by a five-person band under the direction of Edward Ridley, Jr. and the young Porthouse cast performs them with energy and skill—even if some of the voices don't maintain sufficient control when the songs call for sustained notes and maximum volume.

In the title role, Kirstin Henry has a clear, pure soprano that serves her character well. She is even able at times to surmount the sentimental glop in the lyrics ("You can float across a rainbow sky/to once upon a time") and register something resembling honest emotion. That is no small feat.

Brooklyn's father is underwritten, as the authors never establish a connection between him and his daughter, while his backstory in Vietnam is given short shrift. Thus impaired, William A. Porter does what he can with the role. Director Eric van Baars keeps the pace moving in the 90-minute one-act. He also adds some nice staging touches, using a two-person ensemble (Dylan Berkshire and Maia Watts, along with Billings) to fill in at numerous places.

Like its title, BKLYN feels a bit squished and abbreviated when it comes to fleshing out the essence of this story. And if that makes anyone sad just remember what the play reminds us: "Sometimes with our tears we can water roses."