If You Think the Sherwin Williams Proposed Pedestrian Skybridges are Stupid, Say So By Sunday 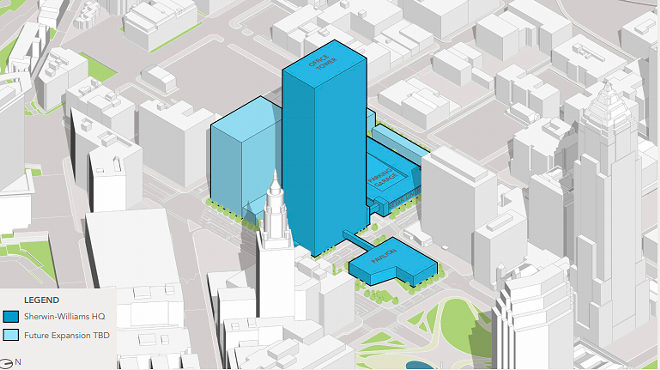 Sherwin Williams will present the concept for its global headquarters on Public Square to a joint City of Cleveland committee Tuesday at 9 a.m. It'll be the first of three public meetings related to the project.

The project proposal was released earlier this month and revealed plans for a 36-story skyscraper, a five-story parking garage, and a two-story pavilion that will serve as both a training center and showroom for the global paint corporation. The project will be located on what are now surface parking lots to the west of Public Square. The skyscraper, as proposed, would be the fourth-tallest in Cleveland.

If you're like us, you may have misgivings about the "pedestrian skybridges" that, in the current proposal, link both the pavilion and the parking garage to the office tower. (We have ranted about pedestrian bridges before — in particular, those connecting parking garages to the Jack Casino — and the disastrous ripple effects that they've caused downtown.)

If the skybridges or any other element of the current Sherwin Williams proposal grinds your gears, feel free to sound off and submit comments via email to the City of Cleveland Planning Commission at cityplanning@clevelandohio.gov. All comments must be submitted no later than 5:00 PM on Sunday, 7/18/21.

This is just to flag that deadline for you. All comments will be given to the joint commission and will, evidently, be responded to by Sherwin Williams on its website at some point after the Tuesday meeting.