Tower City Mall Owner Pivots From Calling Their Mall a Mall to Calling It a Marketplace, Excitement Brewing 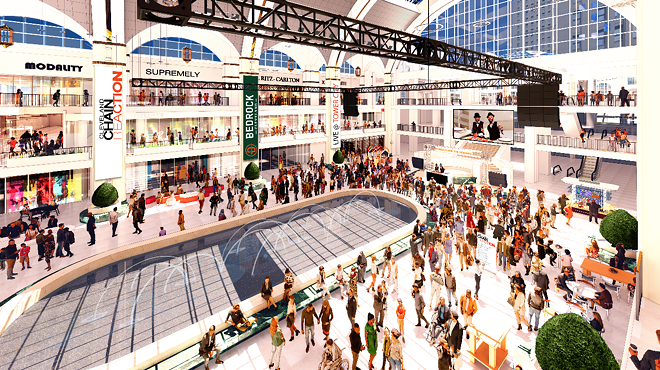 Tower City Center, which has been a mall since the Avenue Shops opened in 1990 and which has remained a mall, albeit a dying one with disinvestment and fleeing tenants that have left it a ghost town, after Dan Gilbert's Bedrock real estate company purchased it in 2016, and which was later temporarily the subject of plans by Bernie Moreno and Bedrock to call the mall City Block instead, will continue to be a mall but will now be called a marketplace, Bedrock announced yesterday.

"The iconic Public Square mixed-use development, most recently home to The Avenue Shops, is set to become a hub for shopping, pop-up retail experiences, dining, and entertainment, while also bringing an influx of local small- and minority-owned businesses to one of downtown Cleveland’s more highly-trafficked areas," the company said in a press release. "Plans for the marketplace are underway as downtown Cleveland prepares to welcome scores of visitors over the next 12 months for major events like the Rock and Roll Hall of Fame Induction and the NBA’s 70th All Star weekend."

No tenants were announced, and Bedrock told Cleveland.com there will be no investment in renovations for now, but it has partnered with Cleveland Chain Reaction, a venture that invests in entrepreneurs, to fill spaces and it will add banners and artwork to the space.

As for why this is a marketplace and not a mall, per that Cleveland.com article:

Bedrock CEO Kofi Bonner sought in an interview to differentiate the “mall” and “marketplace” designations, likening the goal as being closer to a farmer’s market, with entertainment mixed in with shopping.

“It’s really about providing opportunities for the integration of experiences, interaction amongst people and really providing a place that’s expressive of that energy, so that people don’t feel that they’re just there to primarily shop,” Bonner said.


You see, like the way a farmer's market is distinctly different from a grocery store because a local musician is strumming an acoustic guitar on a sidewalk and nothing else, Tower City will now be a marketplace in the same way Great Northern is basically an amusement park and not a mall because there's a tiny train that gives kids rides and a play area.

Recent years have seen vacancies accelerate both in shops and the food court, with Cleveland Cinemas and Brooks Brothers being the most high-profile departures.

But, this transformation promises to stem the tide.

"Centrally located and modeled after the great marketplaces from around the globe, Tower City Center will be a destination for the community to convene, dine and interact," Bedrock declared.

Congrats on the mall. Gonna be a good one. Maybe. But definitely gonna be a mall.