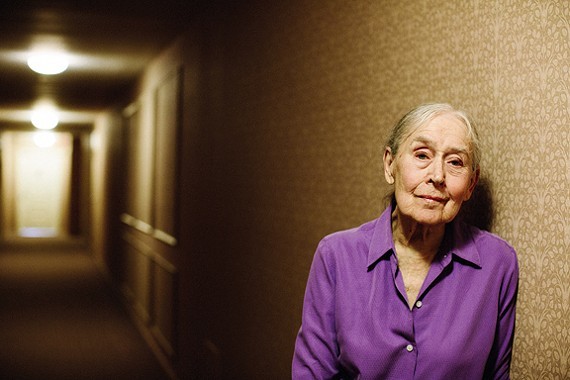 Dorothy Silver passed away over the weekend at the age of 92 after suffering a stroke.

I came here from New York City in 1993, as a professional actor and a stranger to Cleveland. I remember getting lost on its streets and searching for places like the West Side Market, but I can’t recall ever not knowing who Dorothy and Reuben Silver were. They were the "First Couple of Cleveland Theater."

They performed in and directed countless plays, such as All My Sons, The Dybbuk, and Mrs. Warren’s Profession at the Jewish Community Center, Karamu Theatre, Dobama Theatre, Ensemble Theatre, and many others. I loved the consummate Silvers from a distance.

Then in 2014, director Scott Plate brought Dorothy and I together at the Beck Center to perform in the two-person play ‘night Mother. At the time Reuben was very ill so the subject matter of Marsha Norman’s play—a daughter discussing her planned suicide with her mother—was wrenching. Dorothy left our rehearsals to care for him, so to make things easier I suggested we drive together.

During our rides we shared stories, wrestled with questions about our work, the world, music and family. And I fell even harder for Dorothy the woman, wife, mother and grandmother. On her birthday, I made her snowball cupcakes like the ones her character ate in the play. Over time she became my dear friend, and here are some things she told me over the years:

"Family is everything." Her beloved family includes Reuben (deceased), her sons Paul, Dan and Josh, her grandchildren and her great grandson.

"Remember your stories." Share them. This way the people who die never leave you. She told me about growing up the youngest child of a poor family in Detroit, rich in love and music. She recalled how her passion for theater was fed by working as an usher in one of the city’s theaters where she saw actors such as the Barrymores, Katherine Cornell and the Lunt-Fontannes. And she told of the early days of their dating, when Reuben drove a cab for a living and she’d ride with him. He told her he wanted to tell her everything about himself. Dorothy smiled wide when she told me he spent the rest of their life together doing just that.

"Music is the highest art form." She was proud to be the mother of musicians who were married to musicians, and so proud of her granddaughter Sarah who played the violin. Dorothy believed music was the purest art form and she knew if there was such a thing as heaven (she adamantly believed there wasn’t) it would have to be made of music.

"The joy is in the process." Dorothy was happiest when she was working and was tireless in her process. Any time we worked together, we spent hours outside of rehearsal, probing. She would say, "You can always go deeper, be better, you just keep trying." This is something she did impressively, to the end of her glorious life. My last phone call with her began with her saying, “Tell me what you’re working on.”

"Community matters." After every show she’d find her way out to the lobby, to be with the audiences she loved and who adored her. When we worked together I’d hang behind and watch, awed by the number of people in the audience she knew by name, greeting them warmly, holding hands, touching faces, hugging. The connection was necessary and felt like a party, one that I never wanted to leave.

In the seminal moment of ‘night Mother, the daughter Jesse is supposed to separate herself from her mother with an unexpected shove and slide through the door which she quickly locks behind her. When we rehearsed that moment we weren’t happy with it. We fumbled with the shove till we found what worked best for us. Instead of pushing Dorothy, I hugged her then slipped through the door.

If I could, I’d call her back to tell her she got the blocking wrong. And then I’d ask her to run it once more just to make sure we get it right.

But this time I’d hold on tighter.

Laura Perrotta is a professional actor in Cleveland.