Coming Soon to the East Bank of the Flats, Smokey's BBQ and Saloon From James Baker, Son of Al 'Bubba' Baker 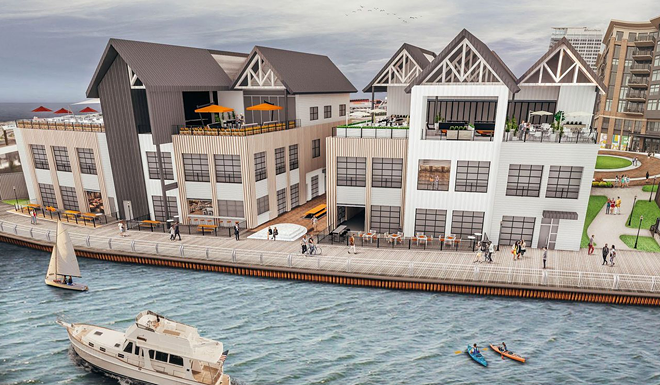 This fall, Smokey’s BBQ and Saloon will be bringing Texas-style barbecue to the East Bank of the Flats. The restaurant will occupy the second level of a new three-level building sandwiched between Alley Cat and the forthcoming Jade from Zdenko Zovkic. The restaurant is on pace to open in September.

When it does open, it will feature a name familiar to both Browns and barbecue fans. Chef-partner James Baker, son of Al “Bubba” Baker, is eager to get back in the game. Baker literally grew up in the business and was thrilled when he was connected with owner Jillian Wolstein.

“The stars had aligned,” Baker says. “I was looking for a way to get back into what I was doing. That’s my true passion. I love absolutely everything about the barbecue industry. I’ve been doing it since I was seven years old.”

Like most teenagers, Baker says that he couldn’t wait to leave his family’s restaurant business. But all it took was a few years away for the bug to come back and bite him. Working side by side with his father for pretty much the entire 13-year run, Baker learned the ins and outs of real barbecue. He will be bringing that expertise and experience with him to the Flats.

“It will be similar to what we were cooking over at Bubba’s Q: those same recipes, cooking processes, dry rubs, barbecue sauces,” he says. “All those things that Clevelanders have grown to love over the 15 years that we were open at Bubba’s Q.”

Meats like brisket, pulled pork, St. Louis ribs, whole chicken, sausage, turkey legs and beef ribs will be smoked over fruitwoods in Southern Pride pits, just like at Bubba’s Q. They will be joined on the menu by sides like mac and cheese, baked beans, coleslaw and Baker’s grandmother’s famous greens.

Smokey’s BBQ and Saloon will be a full-service, family friendly restaurant, adds Baker. Baker’s kitchen will also support the two additional businesses in the building, a laidback whiskey and cigar lounge on the third floor and a new live country music venue on the main floor.

Baker says that they are hoping to be open for the Browns home opener on September 19. Regardless when the restaurant does finally open its doors, you can be certain that Al Baker will be in attendance.

“He is super, super excited,” Baker adds. “He’s like a mentor to me and I talk to him every single day.”