The Suicide Squad, a Festival of Blood and Guts, is Most Anti-Marvel D.C. Movie Yet, and it's Fun as Hell 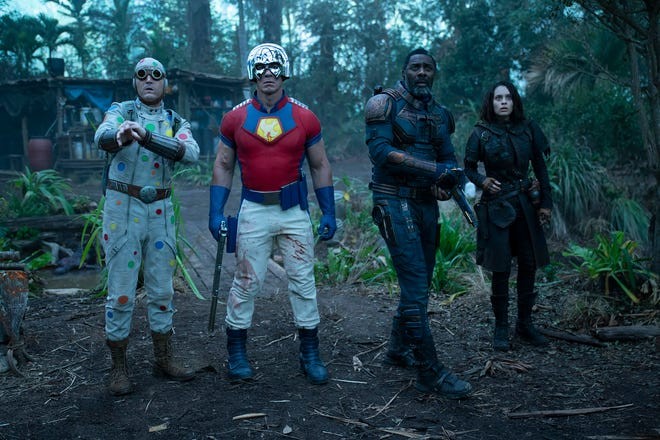 It's clear within the first 10-12 minutes of The Suicide Squad, which opens Friday in wide release and on HBO Max, that literally everyone except for Harley Quinn (Margot Robbie) will be disposable. Not just the nameless South American soldiers, characters of which ilk tend to be dispatched via impersonal explosions, falling skyscrapers and/or bloodless gun battles in PG-13 superhero fare, but central characters too. The death count is higher (probably) than any "superhero" film made to date, and the violence itself is gleefully, inventively staged to produce maximum gore: Heads are blown off or sliced in half in what feels like every scene; bodies are ripped along unexpected axes; viscera are evacuated by exploding bullets, (and occasionally rearranged into title cards); flesh and tendons are nibbled by rodents and mutant fish, etc.

I have misgivings about my own happy hooting at these bloodbaths, but the zany tone of the film is so over-the-top from the jump that you feel — or at least I felt — a bit freer to enjoy them without much moral inquiry. No tears will be shed for the likes of Pete Davidson.

The plot bears only passing mention. A team of prisoners with special abilities is assembled for a guerilla mission on a fictional island. They must infiltrate a top-secret military facility to destroy evidence of experimentation with an alien life form, a pink-and-blue giant starfish that becomes the film's final boss.

Written and directed by James Gunn, the unabashedly male mind behind Marvel's Guardians of the Galaxy films, The Suicide Squad successfully erases the execrable Suicide Squad (2016) from memory. So pleased is Warner Bros. to consign the original attempt to Hollywood's dustbin that the current is marketed more as a reboot than a sequel. Note that it is not Suicide Squad 2. This one is far more assured in its purpose and far less solemn in its dealings with purported bad guys. (Jared Leto's insufferable Joker, praise God, is nowhere to be seen.) David Ayer, the original's director, has gone on to make the Netflix film Bright and 2020's The Tax Collector, my own viewing of which was one of the pandemic's least pleasant experiences.

The relationship is not quite 1:1, but Suicide Squad shares more than just a director with Guardians. Familiar cast members, including Michael Rooker, appear in supporting roles. A curated soundtrack heavy on oldies is ever-present. The central team features an array of goofy misfits — with only a few carryovers from the 2016 film — including at least one nonhuman with limited verbal skills who's likely to endear himself to audiences. In Guardians it was Groot. In Suicide Squad, its Nanaue, a walking shark whose monosyllables are voiced by Sylvester Stallone. Above all, the script allows for the bantery ensemble chemistry that made Guardians such a laugh riot.

Harley Quinn remains the miscreant soul of the franchise. She earned her own film, Birds of Prey (and the Fantabulous Emancipation of one Harley Quinn), which was roundly celebrated in early 2020 for its social resonance but which I found about as watchable as Sucker Punch, which is to say not very. She shines in a supporting role here. Idris Elba assumes Will Smith's leading man position — "Bloodsport" is technically a new character, though his special skill (sharpshooting) and his principal motivation for participation in the squad (a daughter), are identical to Smith's "Deadshot" — and puts on a commendable acting display in early scene work, particularly with Viola Davis, who reprises her role as the squad's steely organizer, Amanda Waller.

It's worth mentioning a weird dynamic that emerges from the sloppy foundations upon which the D.C. cinematic universe was constructed. There is basically zero connection to any of these characters beyond Quinn. Gunn, then, with D.C.'s permission, has opted to go in the opposite direction of Marvel, which painstakingly developed its main characters over years of individual films. The Suicide Squad shatters that prerogative. Its goal is to introduce as many new characters as possible, and then kill most of them for laughs.

Given the misadventures of The Justice League and its offshoots, one rather admires the strategy.