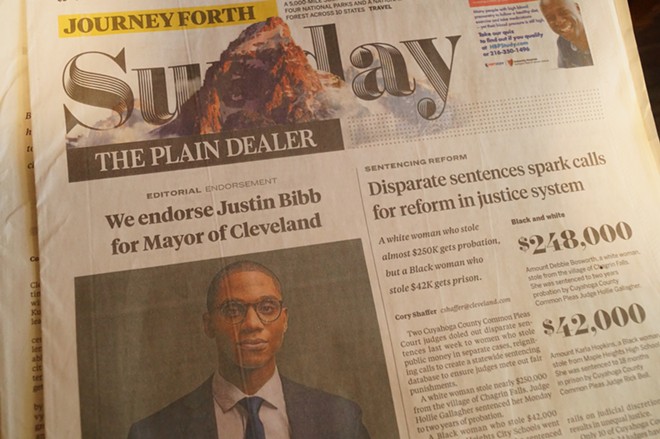 The editorial board of cleveland.com and The Plain Dealer has endorsed 34-year-old nonprofit executive Justin Bibb for Mayor of Cleveland.

In an editorial printed on the front page of the Sunday paper — what it called a "rare step" — the board said that while Bibb was young and politically inexperienced, he had forged relationships with leaders across town and had worked harder than any other candidate to understand the city's problems and think innovatively about solutions.

The piece also noted an element of Bibb's appeal that hasn't been mentioned much: He is the most likely candidate, the board argued, to attract a "powerhouse cabinet" that will help extricate the city from the stagnancy of the Jackson years. It compared Bibb favorably to Mayor Michael R. White in that respect.

Though the piece's headline was an endorsement of Bibb, it expended equal ink and passion urging voters not to vote for Dennis Kucinich.

"Whatever you do," it pleaded directly, "don’t vote for Dennis Kucinich. As much as we believe Bibb offers a grand hope for the future, we believe Kucinich is not relevant to our future challenges."

The editorial board criticized Kucinich's fear-mongering and grandstanding on the campaign trail, but took special exception to his plan to use the city's rainy day reserves to hire 400 new police officers. Given the existing cost of public safety, such a plan, the piece declared, was "ridiculous."

Editorials are unsigned pieces that represent the institutional stance of the publication and are distinct from the work of reporters. It's perhaps unsurprising that this piece could not resist celebrating City Council President Kevin Kelley, who by any metric beyond fundraising has run an anemic campaign. The editorial board said it would have endorsed him if not for Bibb and unironically called him a "true public servant," unaware or unconcerned that Kelley's contempt for the public is the attribute most highly valued by his donor base: the corporate sector. Even now, Kelley has stalled and manipulated efforts by a grassroots coalition to allow public comment at council meetings. This is in keeping with his record as council president since 2014.

The editorial board — just like Scene, for the record — said it was heartened by the quality of the candidates and the rigor of the public conversations in the leadup to the Sept. 14 primary. The piece found qualities to recommend in all candidates save Kucinich and Ross DiBello, who has declined all interviews with cleveland.com / The Plain Dealer.

Though cleveland.com has been largely absent from campaign reporting until now, it drops its endorsement as it launches a series of interviews with the candidates on its weekday podcast, This Week in the CLE, with editor Chris Quinn and political writer Seth Richardson. The first is with Zack Reed.

Mayoral forums, meanwhile, have dotted the calendar through July and show no signs of slowing down. This Tuesday, The City Club and Ideastream will host the first of two official debates, with questions for the candidates sourced from Cleveland residents.