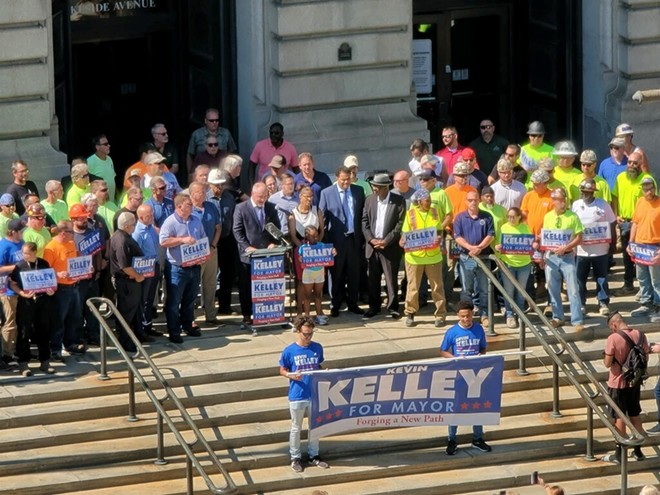 City Council President and mayoral candidate Kevin Kelley has announced a sweeping jobs programs that he says will create a local jobs market "where every Cleveland resident who wants work will have work."

The "Cleveland Jobs Now" program is the first major policy proposal of Kelley's campaign. It proposes using American Rescue Plan dollars to employ Clevelanders on a host of public projects, from parks to murals to clean energy installations to commercial and residential improvements. Kelley likened the proposal to Franklin Delano Roosevelt's Works Progress Administration and said Cleveland Jobs Now would be "the biggest program of its kind in Cleveland since the original WPA."

“We have a great opportunity to invest in the future of Cleveland on many fronts and creating jobs for our residents is one of my top priorities,” said Kelley, in a campaign press release. “My Cleveland Jobs Now plan is an intentional and bold way to make sure that we connect unemployed citizens with good paying jobs that help improve our neighborhoods.”

The program, as currently proposed, would include a process for public input so that residents across the city could select projects to be pursued in their neighborhoods. Every project selected would include apprenticeships that lead to full employment.

The plan is scarce on specific details, but says that it would coordinate with area nonprofits and would not duplicate the existing work of local jobs programs. It also placed special emphasis on public art and said the program would employ both established and aspiring artists on neighborhood beautification projects.

Kelley has previously said that providing broadband access citywide was one of his top priorities with American Rescue Plan dollars. Indeed, he called it his most "progressive" policy position in a recent forum. And it's unclear how much of the ARP dollars Kelley intends to designate for the jobs program, but he has stressed in virtually all campaign appearances that Cleveland's recovery from the pandemic must include everyone for it to be considered successful.