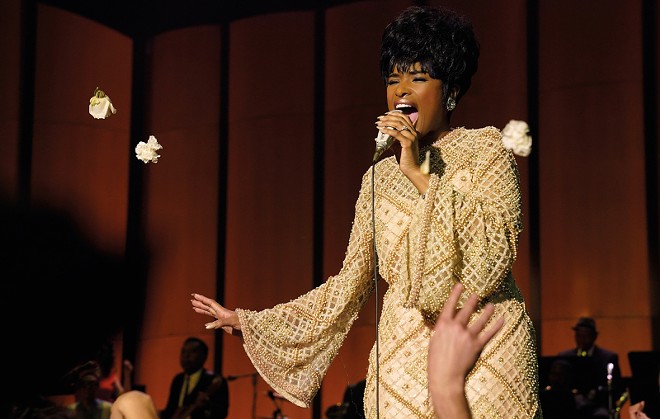 Jennifer Hudson is surely one of only a handful of humans on earth who has both the acting and vocal chops to credibly portray Aretha Franklin, the Queen of Soul herself. In Respect, which opens Friday in wide release, Hudson channels Franklin in – beg pardon – a soulful performance that’s better and more electrifying than the film overall. It is equal to her Oscar-winning turn in Dreamgirls 15 years ago.

The film is a straightforward 2.5-hour musical biopic that more or less covers the same ground as Franklin’s Wikipedia entry. It still somehow manages to stumble upon the dramatic beats that audiences have seen in virtually every other musical biopic in existence. Would you believe Franklin had a terrible bout with substance abuse?

Still, Franklin’s iconic songs, and Hudson’s powerhouse performances of them, anchor the film. Viewers will walk out of the theater hungry for YouTube videos of live shows in the 60s and 70s. Both the improvisations with the studio band in Muscle Shoals, Alabama, in creating Franklin’s most famous hit and a complete performance of Amazing Grace are particularly memorable. These real-time musical finales and these studio scenes have both become hallmarks of the genre in recent years – looking at you, Bohemian Rhapsody — but are executed seamlessly here.

Directed by TV alum Liesl Tommy in her film debut, Respect is about as reverential as filmmaking gets. And while occasionally cliché, the script celebrates Franklin’s activism and her strength and resilience as a Black woman who was a victim of childhood trauma. Forest Whitaker, Marlon Wayans and Broadway legend Audra McDonald co-star. The most sensational supporting performance, though, belongs to Skye Dakota Turner, who plays the 10-year-old Aretha with a joy and panache that lights up the screen.