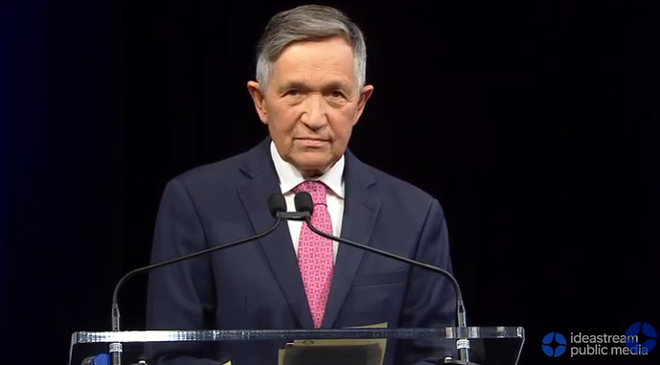 Where on earth to begin a discussion of the Cleveland Mayoral Debate of Aug. 16 — technically not a second debate but the second half of a debate that began one week ago. Like the first half, Tuesday's rumble aired on WVIZ and WCPN and featured questions from residents curated and pre-taped by coordinators. Topics included education, jobs and the economy, and the environment and public transportation.

If the candidates learned anything from Part I, it was the importance of raising one’s hand to speak. Virtually everyone wanted to get in on the action in virtually every question, even when no rebuttal was required or when they had little of value to add. The debate thus proceeded at a furious pace, all of the candidates elbowing for airtime while Castele heroically babysat.

Much of what I wrote last week stands. But below are a few new and modified observations that adhere to the Winners and Losers format, mostly because folks seem to enjoy and appreciate it. As always, the “Winner” and “Loser” tags are mine alone, and tend to be a matter of degrees based overwhelmingly on the performance at the event in question. Some “winners” are less straightforward than others, as in, for example:

Dennis has clearly lost a step. He simply doesn’t have the fire at the lectern that he had as recently as 2018, during his gubernatorial run; nor does he have the same command of his talking points. It’s a lot like Joe Biden on the presidential campaign trail or Frank Jackson over the past 12 years or so. As a general rule, folks in their seventies have a harder time keeping up with folks in their 30s, 40s, and 50s.

At earlier forums, Dennis’s dramatic pauses seemed purely theatrical. Now, they seem much more like he’s taking a moment to gather his thoughts. The velocity of the event demanded constant attention from the candidates, and Kucinich, who had a hard time hearing questions and a hard time sticking to the time limit, frequently looked gassed and disoriented.

Tuesday, he began his evening with a gamble: answering a question about his connection to the local Hispanic community in Spanish, a noble if superficial attempt that required real mental strain and visibly destabilized him for the rest of his answer. Later, he had a blowup with Kevin Kelley re: Kelley’s lobbying against the local $15 minimum wage — both came out looking like dickheads — and overall advanced the central planks of his campaign in more or less the same way as he has in weeks past.

So how did Dennis “win”?

For starters, because literally everyone is talking and tweeting about his goofy stare.

Dennis’s multi-second staredown of the camera was by far the evening’s most memorable moment, taking the viewing audience and even Nick Castele off guard. The question was related to the city’s failed recycling program. Kucinich was criticizing Kelley, (a motif!), who had called on everyone to do a better job recycling. Kucinich argued that you can’t blame Cleveland residents for the city’s recycling woes.

“You have to blame City Hall,” he said. “And you don’t wanna … recycle … failed leadership.”

Reposting the Dennis! zinger and stare for posterity pic.twitter.com/Wo4DiyrXVy

What the hell was this!?!?! So weird! So awkward! Or was it a baller power move! Perhaps an accidental indictment of himself?! Another example of Dennis completely losing his train of thought!!?!? However you view the stare, it’s the clip that’s being replayed and edited and giddily memed by various elements of the intelligentsia who tuned in. It's overshadowing everything else.

Dennis also managed to repurpose the “Dennis the Menace” nickname into a badge of honor during his closing statement, a predictable, yet savvy move. Though it’s unclear which, if any, of his opponents are actually referring to him that way — it doesn’t appear on the “Cleveland’s Worst Mayor” site created by Kevin Kelley’s PAC — he still got the last word.

Dennis also pledged that under his administration Cleveland would return to an elected school board, the headline comment from a vague and meandering conversation about CMSD.

Zack has really poor combat instincts. More than almost anyone, he’s willing to mix it up and call people out on the debate stage, yet he does so with such limited ammo and foresight. You feel for the guy as he sets these cringey traps for himself. To a question about indigenous history and diverse cultures in school curriculum, Reed (in a rebuttal) said, “We can talk about history and history books, but let’s talk about right now.” He proceeded to discuss his attendance in years past at Cleveland Indians opening day protests. Reed deserves credit for standing with protesters, but he framed his response all wrong. (The question was, after all, about history books.) And it crumbled almost immediately. “We can talk about what we’ve done in the past,” he said moments later, “but I’m talking about what I’ve done recently.” But wasn’t he supposed to be talking about right now? Goal posts moving in real time.

What Reed had done in the past, incidentally, was the subject of one of the debate’s two key dustups. Basheer Jones went after Reed, savagely, for a failure to accomplish anything of substance during his 17 years on council. You’re all talk, no walk, was Jones’ point. Reed attempted to respond with a laundry list of projects he’d shepherded in Ward 2, but the battle was already lost. Later, Reed was given a golden opportunity to discuss his plan for Burke Lakefront Airport — something that distinguishes him from the rest of the field — when asked about how he’d preserve Lake Erie as an asset, but he stumbled through a nonsensical answer involving Carl Stokes.

In closing remarks, he criticized Kelley and Bibb for endorsements by Frank Jackson and Michael White, respectively, but the longtime city councilman is hardly the candidate to level criticisms of ‘forging a new path.’ No one believes for a moment that Zack wouldn’t be shouting these endorsements from the rooftops if he’d received them himself.

Hate to keep grouping these two together, but their performance in the debate setting represents, in my mind, a tier above the other contenders. On Tuesday, both Jones and Bibb seemed to be on a first-name basis with all the residents asking questions and name-dropped their abundant connections regularly. Doing so can have a triple-whammy effect: It humanizes and/or dramatizes the issue in question, it makes them seem connected as candidates, and it makes those getting name-dropped feel special. (They’re both on the verge of overdoing it, though, tbh.)

Bibb tends to avoid confrontation while Jones confidently and sparingly seeks it out. Once again, neither sustained lasting wounds from their opponents’ criticisms. Kelley was the only one who bothered to go after Bibb, arguing that this is “no time for on-the-job training,” a reference to Bibb’s lack of elected experience. (Kelley needs to be told that this is also no time for passive aggression.) During the Jones-Reed exchange referenced above, Reed tried to turn the table on Jones by calling out his poor attendance at City Council meetings. This is a perfectly legitimate (and I think good!) attack line against Jones, but Reed unsheathed it flailingly, as he himself was getting attacked. Its effect was blunted in the morass.

Stylewise, Jones sported a gray suit with an almost iridescent bronze tie that, apart from Sandra Williams' striking fuchsia ensemble, was the outfit of the night. He launched into his answers conversationally, without stalling via pleasantries or preambles. He's a natural.

Bibb mentioned the hideous Jersey Barriers on Public Square during the public transportation conversation. On this topic and others — schools in particular — many of the candidates’ answers were trite and scripted, so moments of specificity stood out.

Both Reed and Kucinich attacked Kelley for his efforts to block a local $15 minimum wage. In response, Kelley doubled down, thanking Reed for voting alongside him against the local effort and arguing that it was the right decision. Unctuous and ugly, Kelley always seems to have real distaste for anyone who questions or criticizes him on stage, even when he’s masking it with sarcasm and smarm. One recognizes it as the same distaste he has for council members who question his leadership and for residents who have pleaded for a modicum of transparency and democracy at City Hall.

Kelley was able to tout the jobs program that he announced last week, one in which every Clevelander who wants a job can be employed on city projects, but in the limited response time was unable to expound on the program’s details.

After a bumpy outing last week, DiBello embraced the jovial, adversarial tone that made his outsider run something to cheer on. He opened with a literal salute when introduced and hammered home his ideological points in ways that, this week, directly related to the questions posed. He illustrated his support for a $15 minimum wage, for example, by discussing his experience working at the Casino in 2012, and seeing four Black women co-workers cry their eyes out after receiving their first biannual paycheck with no tips included on top of their $6/hr. Meanwhile, millions in subsidies were flowing to the Casino’s former owner, Dan Gilbert.

DiBello had a few bad answers, straight up, but spoke more passionately than last week. In a question about young professional retention, DiBello pulled no punches. “We’re one of the only urban areas on planet earth that consistently loses people. Why would you want to set up shop here?” He said. “We don't spend our money well and we don't have good leaders.”

That about sums it up! DiBello’s speechy closing statement set his candidacy apart from the other six. And while he remains the longest shot, by far, in recent polling, he is successfully injecting progressive policy prerogatives into the mayoral conversation. Given the limitations of his campaign, that should be considered a win.

Williams emerged last week with a couple of forceful moments and memorable one-liners, but returned Tuesday to the standard recitation of her background and the dollar figures she's secured for various Northeast Ohio projects. Other than the outfit and a defense of citizen initiatives — “If voters in Cleveland want to vote on a $15 minimum wage, we should let them,” she said — she failed to make much of an impression.