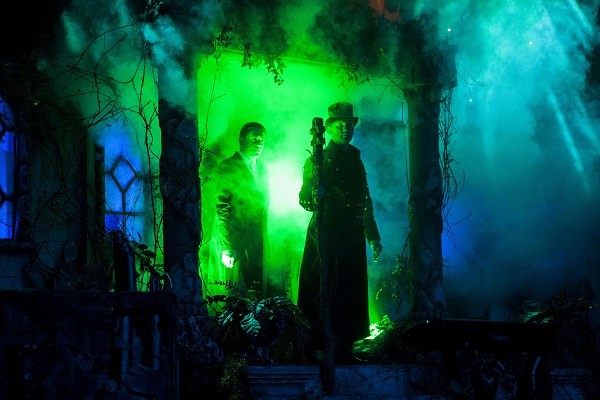 Update: Earlier this year, the local Goth act Midnight Syndicate released its first live album, Live Shadows. Recorded between 2014 and 2019 at the multi-media shows at Cedar Point’s HalloWeekends, the album features new material and newly arranged live versions of music from throughout the group’s career. The group also released a series of music videos highlighting each of the four Midnight Syndicate Live! productions.

Now, Midnight Syndicate has just announced the release of its 14th studio album, Bloodlines. The album is a prequel to the duo’s best-selling, haunted mansion-themed, The 13th Hour. The new release explores the world of the Haverghast family, a sinister clan first introduced on the 2001 asylum-themed album Gates of Delirium.

“The events that occur in Bloodlines happen before The 13th Hour, although how long before is left up to the listener,” says Midnight Syndicate’s Edward Douglas in a press release.

“The selections on this album expand the story of the Haverghast family,” adds Douglas’s bandmate Gavin Goszka. “We wanted this album to flow as seamlessly as possible into The 13th Hour, while still maintaining its own distinct stylistic identity.”

Beginning next month, Midnight Syndicate will bring Midnight Syndicate Live! Conspiracy of Shadows back to Cedar Point. The horror-themed multimedia concerts blending live music, theater and film will run from Sept. 17 through Oct. 31 at the park’s HalloWeekends event. The band has hinted that another major announcement will be coming soon.

Original Post 6/14/2021: The local Goth/electronic group Midnight Syndicate has been releasing albums for years now. But the group, which relies heavily on intricate orchestral music that’s created in the studio, didn’t perform live regularly until just a few years ago.

And now, Midnight Syndicate has just released its first live album, Live Shadows. Recorded between 2014 and 2019 at the multi-media shows at Cedar Point’s HalloWeekends, the album features new material and newly arranged live versions of music from throughout the group’s career. A series of music videos highlighting each of the four Midnight Syndicate Live! productions has been released along with the album.

Live Shadows will be available digitally and on CD and limited-edition purple vinyl.

“This album distills four years' worth of immersive live performances into a collection of tracks that we feel truly represents the essence of these shows,” says Goszka in a statement.

“To this point, all of our shows have had their runs at the Cedar Point amusement park in Ohio,” adds Douglas, “so releasing this album and the accompanying music videos gives us a chance to share a part of the Midnight Syndicate Live! experience with fans wherever they may live.”

The band is currently preparing music for a new release due in August.
Sign up for Scene's weekly newsletters to get the latest on Cleveland news, things to do and places to eat delivered right to your inbox.