NFL Draft Led to a Kajillion Dollars of Economic Impact in Cleveland, Says Company Whose Sole Mission Is to Justify Mega Events 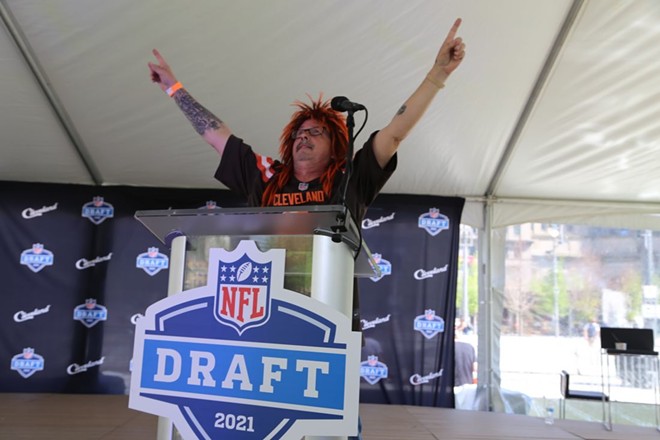 The Greater Cleveland Sports Commission announced this week that the NFL Draft in Cleveland created $42 million in economic impact.

It was a banner headline, front page of the Plain Dealer, the kind of mammoth cash influx that tourism and convention bureaus trot out in the aftermath of mega events to justify the outsized costs associated with hosting these festivities.

The NFL Draft's arrival in Cleveland was a bit different than other marquee events in other years because of the timing — in the middle of the pandemic, on the upswing of a tentative return to semi-normalcy, at a point when vaccinations were available but America was still largely not back to its free-swinging tourism ways.

Regardless of the exact dollar figure attached, it was a boon to the city, if just an emotional one. Downtown felt full and alive in ways it hadn't since late 2019. Cleveland's skyline and lakefront were on display for the entire world and the estimated 40 million people or so who tuned in to watch over the course of the long weekend.

“Hosting the 2021 NFL Draft was a proud moment for our determined Cleveland community especially with it being one of the first major events to allow spectators in a safe manner since the pandemic began,” David Gilbert, President and CEO of Greater Cleveland Sports Commission and Destination Cleveland said in a press release. “Although the direct spending wasn’t comparable to previous host cities due to limited capacities, the impact of this event extended far beyond the dollars and showcased our city to the world.”

And even if a labor market upheaval meant that restaurants and hotels were struggling with staffing, those seats were filled, even if they weren't filled at levels that one would expect outside of a pandemic.

So it's natural to look in the rearview and see initial estimates of $100 million in economic impact and take the announced $42 million as a win.

It's also good and natural to be skeptical of that number.

Economic impact studies, especially those commissioned by cities and tourism bureaus themselves to justify their expenditures, are notorious among economists for their rosy, inflated results, ones they say are prone to overlook things like substitute spending (locals spending money they would have spent otherwise), indirect negative economic effects (people avoiding the area because of the event), upfront costs paid by taxpayers (police, traffic control, sanitation), and an un-nuanced picture on who directly benefits most (hotels, a handful of bars and restaurants in the immediate area of the event center).

The $42 million number here comes from an Economic Impact Calculator made by Destinations International, a company whose sole mission is to help tourism bureuas look good by putting hard numbers behind events.

The Event Impact Calculator measures the economic value of an event and calculates its return on investment to local taxes. Armed with this information, destination organizations and CVBs are better prepared to make the case to policymakers and stakeholders for the ongoing development and growth of the events and meetings sectors.

They helpfully also post testimonials and case studies from various clients. For example, this one from Joel Everts of Greater Green Bay Convention & Visitors Bureau that shows just how the end result "objective" number is from very subjective inputs.

Some EIC numbers are going to be trial and error. When I run a calculation, I always try different numbers and see the results. When I get one that I think makes sense, I name the saved calculation as the various indicator that I changed.

Which isn't to assign ill intent — you trust people are trying to come up with as accurate a number as they can — but it's an inexact process, and one susceptible to the idea that the EIC is going to come out pretty much like the commissioning agency wants.

For the Draft, Cleveland used the STR report (a tool that compares hotel occupancy and performance), as well as data from the NFL's One Pass App, which attendees had to download and use to get into the fan experience, according to the sports commission. That's... not a lot of data. And seems to not include public outlays before and after the event.

The Greater Cleveland Sports Commission collected some $6 million to contribute to the event, coming from a mix of public and private dollars, for instance.

And the city itself requested an additional $400,000 be reimbursed for money it spent on police and another $100,000 it spent on parking enforcement, according to WKYC. Another $165,000 will be spent turning the dock areas where the NFL draft was staged into parking lots, complete with security fencing.

So what's the real deal?

There's no doubt the NFL Draft was fun, an emotional jolt, a reason many, many folks came to town and rented hotel rooms and bought meals.

But as the Greater Philadelphia Hotel Association executive director mused after the city hosted the draft in 2017, the event was more like “a large medical convention that doesn’t quite sell out the city, but does well.”

The NFL Draft might be smaller than the Super Bowl, but it's an incredibly similar event. For the latter, Victor Matheson, a sports economist at Holy Cross who's authored numerous studies on the true economic impact of sports stadiums and events, said the realistic economic estimates are "a number somewhere between one quarter and one tenth what the NFL is claiming."

"Nothing you would turn down."

But not what they say.