Police Accountability Will Be on November Ballot in Cleveland. LeBron's 'More Than a Vote' Organization is Lending Support 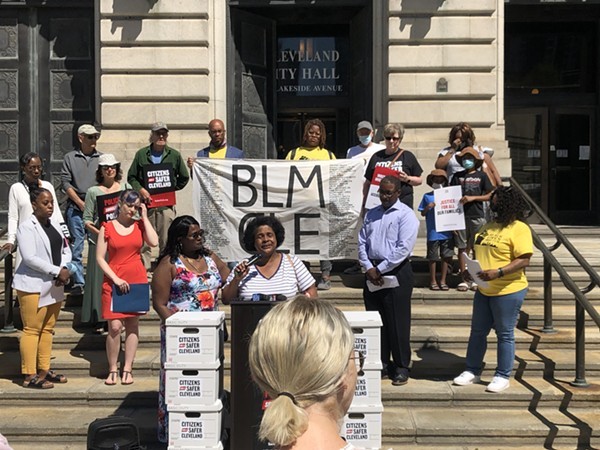 At its meeting last Wednesday, Cleveland City Council voted to put the Citizens for a Safer Cleveland charter amendment on the November ballot. The amendment would give a civilian review board final say in matters of police discipline, eliminating the common situation where the Police Chief or Safety Director disregards the board's recommendations.

"We can't allow the police to police themselves," said LaTonya Goldsby, co-founder of Black Lives Matter Cleveland, when Citizens for a Safer Cleveland launched their campaign this spring.

The grassroots coalition got a huge boost last week when More Than a Vote, the advocacy group founded by LeBron James in the wake of the deaths of George Floyd, Breonna Taylor and Ahmaud Arbery, announced that it would support the Cleveland effort. More Than a Vote was initially conceived to protect the voting rights of Black and brown people but has expanded to help support local criminal justice campaigns.

More Than a Vote has begun a digital content campaign featuring audio stories of Cleveland residents whose family members have been killed by police. They will post these stories in the lead-up to the election and will direct Cleveland voters to canvassing opportunities, phone banks, and events in support of the measure.

“The best way we can bring about change is by partnering with the all-stars who are putting in the work every single day on the ground in the community,” said More Than A Vote Chief Communications & Content Officer Michael Tyler, in a press release last week. “So we’re going to do our part to help Citizens for a Safer Cleveland build an army of volunteer organizers to go door to door and make sure Clevelanders have the opportunity to make their voices heard through this critical ballot initiative that will provide for real justice and accountability in the city.”

It’s simple: families should have at LEAST have the peace of mind of knowing there’s community oversight if their loved one is killed by police. That’s not too much to ask. pic.twitter.com/0jguGyLFjx


The ballot measure was pursued in the aftermath of the murder of George Floyd in Minneapolis and was deemed especially critical in Cleveland, where police leadership have systematically doled out improper discipline, according to standards established by the Consent Decree. Shortly after his abrupt resignation last year, former Safety Director Michael McGrath was blasted in a report by the Consent Decree monitor for consistently being too lenient with discipline and for failing to justify his rationale. This made it impossible, the monitor argued, to repair distrust in the community.

In the Cleveland mayor's race, support for the Citizens for a Safer CLE ballot initiative has been shockingly limited, given the uprisings of 2020 and the widespread distrust of the police. Only candidates Justin Bibb and Ross DiBello are in support of the measure.