In Advance of Next Week's Show at Jacobs Pavilion at Nautica, King Crimson Bassist Talks About the Band's Latest Tour 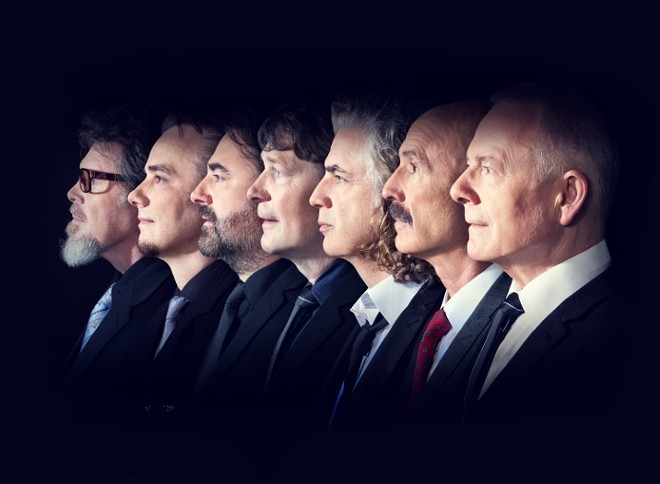 Two years ago, prog rockers King Crimson embarked on a tour celebrating their 50th anniversary. Their goal was to play 50 shows on three different continents. They pulled it off, even landing in Northeast Ohio for a gig. Given that the members have become such fierce road dogs, you can imagine how bassist Tony Levin reacted the shutdown that hit in March of 2020.

“It was pretty odd for me,” says Levin in an email exchange. King Crimson performs with the Zappa Band at 7:30 p.m. on Wednesday, Sept. 1, at Jacobs Pavilion at Nautica. “I’d been touring most of the year for many years, and though I love being home, it was quite an adjustment for me, for my wife and for our dogs(!) to have me around home all the time. Now that we’ve adjusted to that, it’s a new challenge to have me out touring again."

Levin was first in the band, which originally formed in 1968, in 1981 and played with the group through the ’90s, a time period when Crimson delivered some of its most accessible albums thanks to the addition of singer-guitarist Adrian Belew, who brought a pop sensibility to the group.

An incarnation of the group that didn’t involve Levin followed, but Levin rejoined the band in 2008 and has been active ever since.

The group recently issued a load of material from its seemingly bottomless vaults. It’s put out King Crimson 1972-74, the second boxed set of six LPs from Larks' Tongues in Aspic, and Heaven and Earth, a multi-disc DVD-a/Blu-ray featuring material from the late 1990s to 2008, completing the availability of all King Crimson studio albums in 5.1 multi-channel audio.

A documentary movie, Cosmic F*Kc: The King Crimson Documentary, is also in the works. The filmmaker followed the band around for a year and “shot everything imaginable,” as Levin puts it.

An extravagant ensemble that tours with a huge amount of gear, the group currently boasts a line-up that features three drummers, something that might seem daunting to a bassist.

But Levin isn't just any bassist. Levin, who’s played with everyone from Peter Gabriel to Paul Simon and Peter Frampton, is a virtuoso. Keeping up his musical chops during the shutdown provided him with a particular challenge.

“Though I was doing some recording all the time in my home studio, that’s not the same kind of playing as live or even as rehearsing,” he says. “So about midway through last year, I realized my technique was slipping, and I had to start practicing more. Well, practicing at all! Out on the road, with three-hour concerts and two-hour soundchecks, I hadn’t been feeling the need to practice.”

In June, Levin toured on the East Coast with Levin Brothers. At that time, the pandemic had waned, but now that the Delta variant has wreaked havoc, Levin says touring has become “a different situation.”

“People are still very happy to be experiencing live music again, but it’s kind of got an asterisk involved,” he says. “We’re hoping things will get better, not worse!”

The shows regularly include material from 12 of the band’s 13 studio albums and while Levin says he doesn’t have any favorites, “Indiscipline,” a track that features thick bass riffs and seemingly random bursts of electric guitar over pummeling drums, has proven to be a crowd favorite.

“I don’t have favorites of the pieces in the show… or of any of the material," says Levin. "Really — I try to engage with whatever piece I’m playing and do it the best that I can. But on a similar note, I’ve noticed that the audiences particularly like the pieces [such as 'Indiscipline'] where we have the three drummers featured, and they interact in unusual ways.”