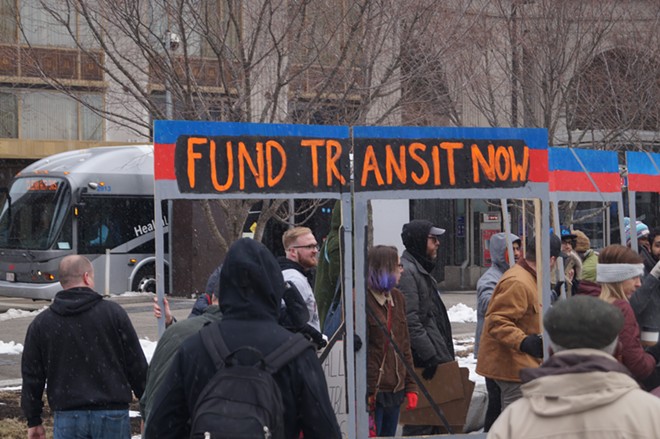 Following the publication of its "Fair Fares" report in 2018, CPT has made significant headway in its rider-first advocacy. Among its accomplishments are the reversal of a $.25 fare increase that the RTA board of trustees passed in 2018, the restoration of the $5 all-day transit pass (down from $5.50), and the implementation of a redesigned transit network earlier this year. The redesign, dubbed "Next Gen RTA," increases frequency on popular transit routes and connects riders to 11% more jobs in under 60 minutes.

But the CPT report notes that without enhanced, sustainable funding mechanisms, RTA will never return to its ridership levels in the aughts, when it was named the best transit system in the country by the American Public Transportation Association. In 2007, RTA provided 60 million rides. By 2019, after multiple rounds of service cuts and fare increases, the number of rides had fallen to 33 million. And in 2020, during the pandemic, RTA provided only 17 million rides.

The report, which has been shared with all seven candidates for Cleveland mayor, argues for a number of provisions that CPT hopes will restore ridership and make RTA more affordable, equitable and safe for all riders. (You can read it in full below.)

Among the most urgent requests is that RTA explore new local funding sources, including a possible property or sales tax levy or a special tax on parking lots.

"Just as Cuyahoga County has implemented a special sales tax on cigarettes and alcohol to fund sports stadiums and the arts," the reports says, "the county should enact a special property tax on parking lot owners. The tax could generate over $60 million annually towards transportation alternatives,
such as expanded transit service, bike and pedestrian infrastructure, and
discounted transit fares for low-income county residents."

The report notes that there are more square feet of parking (940 million) than housing (680 million) in Cuyahoga County and that a special tax on parking — which mayoral candidate Ross DiBello independently proposed at an August debate — would incentivize more equitable, economical land use. Moreover, the report suggests, the tax would set an "international example for sustainability" in Cuyahoga County.

CPT reiterated its demand, in the report, for the elimination of armed fare enforcement officers. Armed fare collection on the RTA Red Line and HealthLine was ruled unconstitutional in 2017, yet RTA has failed to implement a civilian ambassador program, which would be in keeping with the recommendations of Judge Emanuella Groves and would drastically improve efficiency by restoring all-door boarding on the HealthLine.

Though CPT would ultimately like to move to free fares for all riders, akin to the public library system, the report said it believed increasing service coverage and frequency while providing fare relief to those most in need were more immediate needs. The report therefore proposed fare discounts to low-income riders, (and potentially discounts during off-peak hours, to reduce crowding), and a new fare collection system with contactless fare cards and card readers at every door.

The report was published on the eve of the mayoral primary election. CPT has said that under the next mayor, the transit death spiral that persisted under Frank Jackson cannot continue. It sought meetings with all seven candidates to discuss their policy positions. The Cleveland Mayor can be an important advocate for public transit riders and wields influence as the appointer of four seats to the RTA board. CPT told Scene that it has now met with every mayoral candidate other than Kevin Kelley and that the candidates expressed support for various elements of the report.

Sandra Williams, for example, touted her experience at the statehouse and said she was committed to securing additional resources from the state. DiBello seemed eager to explore new tax options. Both Zack Reed and Justin Bibb acknowledged the valuable experiences and perspectives of riders and said they would appoint riders to the RTA Board. Basheer Jones and Bibb have spoken out against the criminalization of fare evasion. And Dennis Kucinich said that he supports free transit for all and would work to secure funding from local and federal sources for free transit pilot projects.

See related PDF Ending-the-Transit-Death-Spiral_CPT.pdf
***
Sign up for Scene's weekly newsletters to get the latest on Cleveland news, things to do and places to eat delivered right to your inbox.