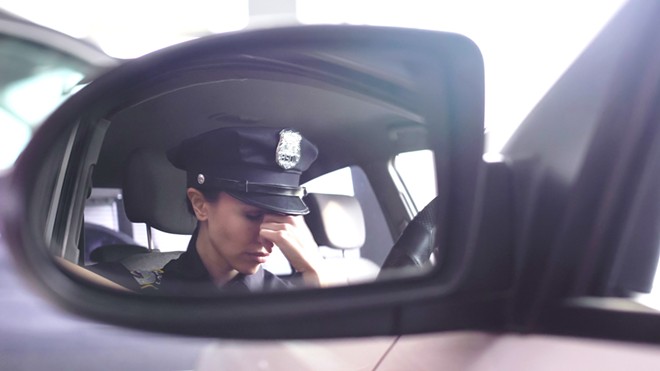 COLUMBUS, Ohio — Last summer's widespread protests were a call for increased police accountability. Now state legislators are proposing legislation that would require law enforcement to receive emotional-intelligence training to better handle themselves while on duty.

House Bill 362, which Rep. Catherine Ingram, D-Cincinnati, introduced in June, aims to create a multi-step training program that educates officers on how to manage their emotions while dealing with the public.

"This bill is specifically for peace officers' training," Ingram said. "But this kind of training, this kind of awareness of yourself also goes along with everything else that's going on. The pandemic actually exacerbated things that we were talking about when this bill first came to fruition, when we first started talking about it. ... Even more so with our police officers, because they're out in the field every day, but they're people just like the rest of us. They have hardships, they have issues and they have family lives and all those other things that they need to deal with."

The call for increased training stems from recent public concerns on how police perform their duties, which drove citizens across the country to participate in Black Lives Matter protests last summer after the death of George Floyd.

According to the National Institute of Justice, an agency that researches the impact of crime for the U.S. Department of Justice, the stress police face while working can result in serious health complications, such as PTSD. A lack of funding also places departments under stress to provide training for their officers.

"What we keep getting tasked for with law enforcement is to do more and more with less [funding]," said William Balling, the Sidney, Ohio, chief of police. "Right now, law enforcement is in a very dynamic situation for different reasons. It's hard to attract and keep officers [with] the pressures that they're under, with the stress they're under, [and] the dangers they have to go through and the different conditions of the job. It's getting harder to get people in, and when you have that, you're stressing the current officers and the staff to the point that it's a rubber band almost ready to break."

Legislators are seeking advice on how to train law enforcement from leadership professionals such as Jack Slavinksi, who has worked with agencies such as the Ohio Fraternal Order of Police to implement emotional intelligence training programs among their staff.

In a June 2020 editorial in the Columbus Dispatch, FOP/Ohio Labor Council Executive Director Gwen Callender praised Slavinski's training model as a successful means of educating officers to deal with themselves and the public.

"Police officers have tough jobs that are under constant pressure, stress [and] uncertainty . . . so there's this constant pressure in their role, and it's definitely on the increase because of what's going on in our society," Slavinksi said. "So that affects their overall ability to make decisions, to think clearly, to adapt, to use judgment to de-escalate things. So emotional intelligence and the resiliency-building elements of it to deal with stress and adversity and anxiety and all that enables them to better manage their brain functions, so that they're able to maximize their physical processes."

Balling said there needs to be a solid foundation for funding projects such as emotional-intelligence training, so legislators do not have to revisit funding multiple times when appropriating budgets for law enforcement. He recommended using surcharge programs such as Kentucky's Law Enforcement Foundation Program Fund, which states use to generate revenue outside of taxes. Balling says programs such as surcharges can continually bankroll training for officers.

"That money then goes into a fund that's used every single year for training," Balling said, "and then the state could decide what is the training that's needed to help fund the training for all officers across the state. And this would be a fund that wouldn't be dependent on officers writing tickets or arresting people because that always leads to a bad taste in citizens' mouths; but this could be a dedicated fund that's not in the general budget, that is nondependent on a budget year to year to year to be approved, but it's a consistent revenue stream."

While Ingram said there currently are no appropriations in the bill to cover funding for this training, she aims to advocate funding "from every direction possible" so a pilot project can be established.

The bill will be revisited in September when the General Assembly returns to session.