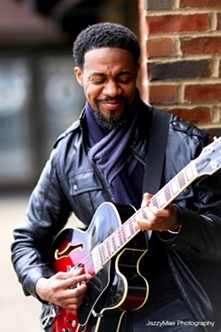 Cleveland singer Alvin Frazier is a self-taught musician who plays six separate instruments including piano, guitar, bass and drums. He began singing at the age of 2 and plucking strings by the tender age of 3.

It has been eight years since the release of Alvin Frazier’s last album, A Wonderful Love: Love & Faith, Vol. 2, but that doesn’t mean that the singer/writer/producer has been resting on his laurels. You can find Frazier performing at various residencies in and around the Northeast Ohio area. Along with that, Frazier recently announced that he had become a member of the Grammy-winning Dazz Band, pulling double duty as both a vocalist and bass guitarist.

On Saturday, Alvin Frazier will host a listening and release party for his latest album, River, in the Foundation Room of House of Blues. The album’s first single, “Lost in Love” has been in steady rotation since March.

“This album is for real R&B music lovers,” Frazier says via press release. “When I think of R&B music three things come to mind: love, romance and sensuality. Those are the things that people who love the genre expect and tend to feel when listening to that type of music. Of course, we know love in of itself can consist of many other different kinds of emotions and experiences but I feel the ones I mentioned previously are the most common. My hope is to engage the listener to explore the inner workings of love and relationships."

Frazier takes pride in being able to reach the level of success he's had in his career thus far without having to permanently take his talents to a larger market.

"Back when my first album [Love & Faith: Volume 1] came out in 2007, I was thinking that Cleveland was too much work, and I was looking into relocating back then," he said in a previous interview. "But then I thought to myself, ‘You were born and raised here. How would it look if someone called back to get a reference for you and no one knows who you are?’ That really struck a chord with me, so then I thought to just build at home. Just work your hand here first. Thankfully, I was able to show that you can establish yourself as an international artist living here in Cleveland."

In addition to his music, Frazier has also done his fair share of work as an actor, appearing in multiple film, television and theater productions including the Miles Davis biodrama Miles Ahead and the stage play SOULmate? His most recent silver screen appearance was in the two-time Academy Award winning film Judas & The Black Messiah, which was filmed in Cleveland.