Cleveland Came Through With Donations for Incoming Refugees From Afghanistan, Now the Search Is On for Housing and Long-Term Support 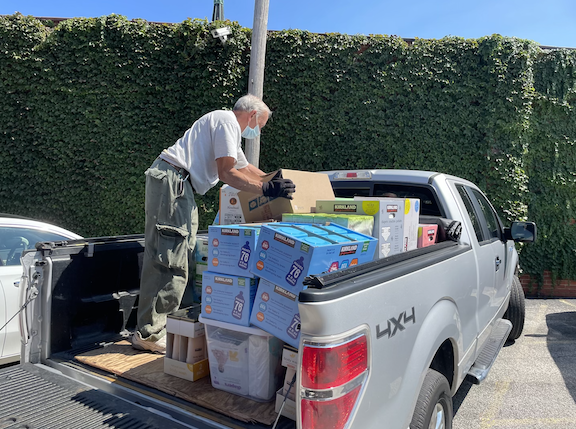 Ohio Gov. Mike DeWine yesterday announced that 855 refugees from Afghanistan will be coming to Ohio, including 285 to Cleveland, all granted humanitarian parole after undergoing stringent security and medical screenings as they sought escape from their country.

The process, little-known compared to other immigration programs, will give the refugees two years to finalize their immigration status through those traditional routes.

“These are individuals who have been partners with United States and deserve our support in return for the support they’ve given us," DeWine said in a press release. “Thank you to the resettlement agencies and communities who have stepped forward and demonstrated they have the resources necessary to help these individuals in their time of need.”

One hundred of those coming to Ohio so far were granted entry through the Cleveland field office of the U.S. Committee for Refugees and Immigrants.

Darren Hamm, the director of the Cleveland field office, says the city came through and then some with both donations and volunteer offers in the last few weeks, so much so that it needed to find more space to store all the donations.

"We had this call for a big open space, a temporary fix, to store the amount of donations that we had stocked for newly resettled families," he says. "Jason Lin, who runs the Lin Omni Square building on Fulton offered some of his space. He said take whatever you want. And it turned out while we were talking we learned he was resettled by our agency from Vietnam in the first wave of resettlement from the country in 1975."

Before they even had a punch list of requested items, private citizens and local companies began dropping off truckfuls of donations — baby wipes, diapers, feminine hygeine products, soaps, shampoos, basically anything they would need.

"It's been almost non-stop since," Hamm says. Now the work of ensuring their safety and financial security once the refugees arrive continues.

"Parolees will have no eligibility for most support systems, because this is different than regular immigration, so we're asking for in-kind donations and money," he says. "A month ago we wondered how we'd amass volunteers to support our programs, and within a week of the crisis in Kabul, we had 60 to 100 people volunteer for all different kinds of roles. Now, the Afghans need long-term support."

There are great barriers to success, he says, once they arrive to a new country with a new language. While his organization will connect them with immigration attorneys, they'll also need safe housing.

"The way we're looking at it, by the time they grant these folks immigration status, they'll have been here awhile struggling, and we're going to do the best we can," he says. "We've said for years that if we're not giving them the same options as other folks we're putting them in jeopardy."

Job access, once a problem, isn't so much anymore. And where housing ten years ago wasn't a problem, it's very much one now.

"We have employers who are finding value, offering good wages and meaningful jobs," Hamm says. "We're having a hard time arrival to arrival, family to family, finding safe housing that's close to permanent."

If you or someone you know can help, you can reach out to the Cleveland field office of the U.S. Committee for Refugees and Immigrants here.