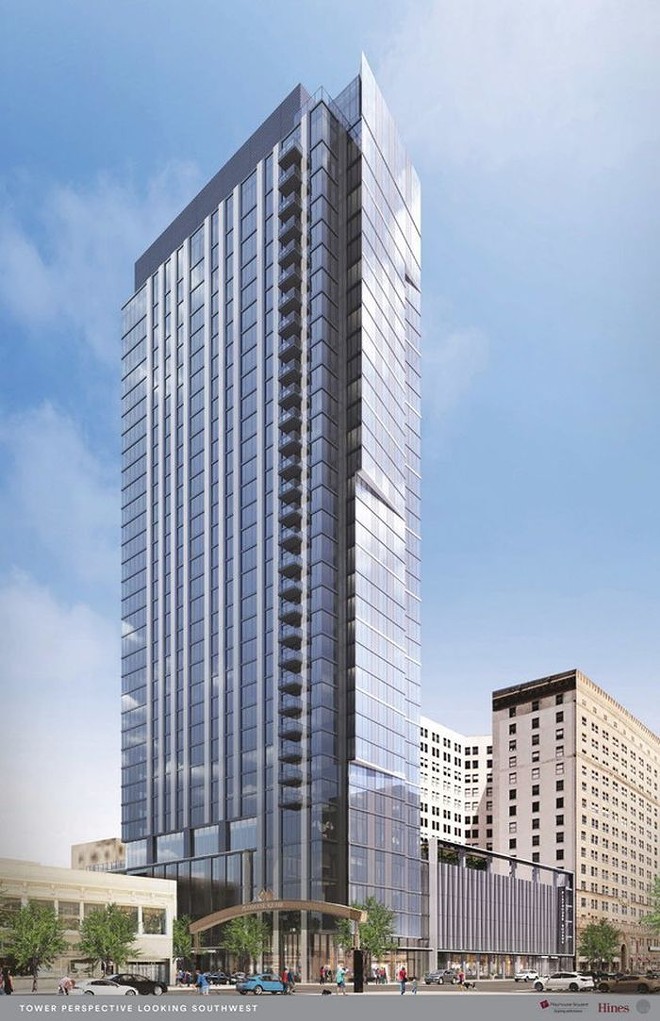 At the City Club's "2021 State of Downtown" presentation Friday afternoon, the  Downtown Cleveland Alliance's President and CEO, Michael Deemer, announced that earlier this year, the downtown neighborhood surpassed its population goal of 20,000 residents. It will now "march toward" its new goal of 30,000.

That announcement is more or less consistent with projections from DCA last year, when then CEO Joe Marinucci said the organization would soon be adjusting its population goals upward.

Deemer mentioned Friday a research collaboration last year with partners in the City of Philadelphia that produced "conservative estimates" showing Cleveland could easily reach 30,000 residents by 2030. He said there were any number of surface parking lots that could still be developed downtown, and that with both the lately announced Bedrock riverfront plan and the Haslam lakefront plan, an additional 10,000 downtown residents would add up quickly. "We are truly just scratching the surface in terms of residential density," he said.

Downtown is, without question, one of Cleveland's fastest growing residential areas. Deemer told Cleveland.com after the U.S. Census was released this year that developers had added 4,800 apartments downtown between 2010 and 2020. That includes recent highrises like The Lumen in Playhouse Square (318 units) and The Beacon on Euclid (187 units).

But recently released neighborhood fact sheets published by the nonprofit Center for Community Solutions show a far lower total population. According to its data, only 12,165 people live downtown.

That's a substantial discrepancy. The Center for Community Solutions' number is a heck of lot lower than even the 15,000 Marinucci was touting back in 2015.

Seeking to reconcile these numbers, Scene sought some specifics about the respective counts.

The Center for Community Solutions' Emily Campbell, who worked on the fact sheets, told Scene that she suspected DCA was measuring the population of a larger geographic area.

"It sounds like they are using the downtown improvement district which is larger than the Downtown Statistical Planning Area (SPA), which is what we use for the profiles," she said.

"Downtown is certainly growing," she added. "It’s one of the neighborhoods that grew the most since the last time we did this [2016]."

But when Downtown Cleveland Alliance described its parameters to Scene, they were virtually identical to the statistical planning area.

"The geography we track for the downtown population covers E.30th to the Cuyahoga River, and Lake Erie to the Innerbelt," wrote DCA's Jonathan Stone, in an email. "This includes areas served by DCA and our neighborhood partners, Flats Forward and the Campus District."

Compare that description to the downtown SPA map.

As for methodology: " We estimate the downtown population by conducting quarterly occupancy surveys of downtown residential properties and incorporating real-time results from other data sources," Stone wrote.

DCA did not address the Center for Community Solutions numbers in its reply, but it sure seems like someone's count is off.

At Friday's City Club forum, Deemer stressed the need for enhanced retail opportunities downtown and said that growing the population would lead to a "virtuous cycle" where more residents leads to more retail and, in turn, more retail leads to more residents. Though the discrepancy may be explained away by different geographic boundaries, DCA's numbers may also be exaggerated to coax this virtuous cycle along. That would be in keeping with the practices of other economic development organizations, which tend to inflate projections in the service of their promotional goals.

See related PDF Downtown-1.pdf
***
Sign up for Scene's weekly newsletters to get the latest on Cleveland news, things to do and places to eat delivered right to your inbox.