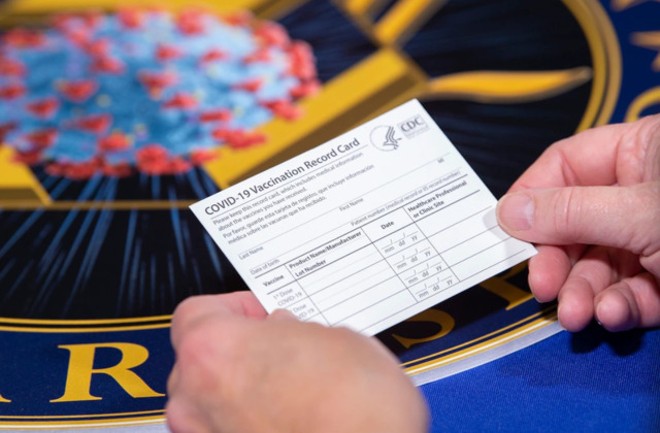 The black market for fake COVID-19 vaccination cards is real, and it's happening everywhere, including Ohio.

The shipments originated in China, officials say, and the materials contained numerous spelling errors. The packages were heading to private residences in Illinois, Maryland, Missouri, New York and Texas by way of Cincinnati.

The agency also has seized thousands of counterfeit COVID-19 vaccination cards in Chicago, Memphis, Anchorage and Pittsburgh, it says.

"Creating or buying a fake COVID-19 vaccination card is illegal, not to mention dangerous," says Cincinnati Port Director Richard Gillespie in a release. "Purchasing counterfeit cards supports criminals whose only concern is their bank account, not American security or the health of our citizens."

The United States has seen a rise in counterfeit vaccination card activity, especially as more and more businesses, schools, music venues and cultural institutions require proof of COVID-19 vaccination for entry, particularly since the U.S. Food & Drug Administration (FDA) granted full approval for the use of Pfizer's coronavirus vaccine in adults in August (Pfizer's vaccines for teens and all vaccines from Moderna and Johnson & Johnson remain under the FDA's emergency use authorization, with more FDA approvals expected later this year).

U.S. News & World Report says that the demand for counterfeit materials has shot up, with research showing that people are buying cards through messaging apps for $100 each. From U.S. News:

In the United States, 45 state attorneys general recently joined together to call on Twitter, Shopify and eBay to stop the sale of false and stolen vaccine cards, according to The New York Times. That pressure led these larger platforms to start blacklisting certain keywords, according to Saoud Khalifah, the founder and CEO of Fakespot, a company that uses artificial intelligence to detect fraudulent product reviews and third-party sellers online.


Meanwhile, colleges and universities in the U.S. are growing concerned about how easy it is becoming for students to cheat the system related to vaccine mandates, The Associated Press reported. Khalifah says that in July, when music festivals such as Lollapalooza returned and students across the country started preparing to go back to school, online stores selling fake vaccination cards appeared in bigger numbers.


Officials reportedly blame the rise in counterfeits on how easy paper cards, such as those provided after inoculation in the United States, are to forge. Other countries, like many of those in Europe, use digital apps and other methods.