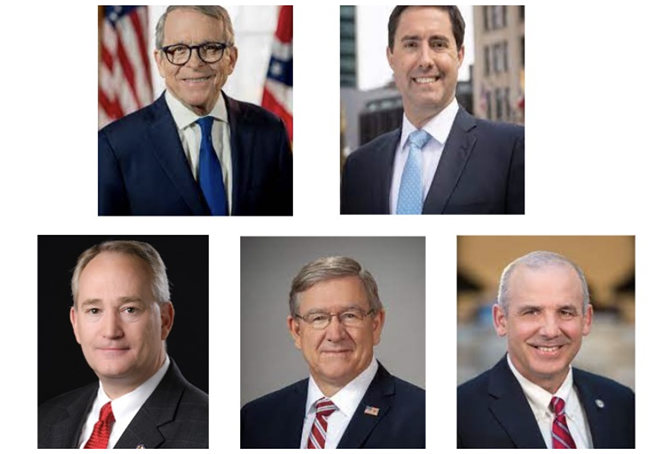 The oddest part is Ohio Gov. Mike DeWine acting as though he’s somehow powerless and had no choice when he voted to rig Ohio elections with partisan, gerrymandered maps for the next four years. After all, he’s only the governor.

It’s an absurd position. Maps were proposed to the commission that actually represent the 54-46 Republican to Democratic political split of Ohioans, as averaged over 16 partisan statewide elections, directly mirroring the 1.9 million to 1.6 million Republican to Democratic registered voter split of Ohioans. The majority of registered voters, 4.5 million, are unaffiliated.

GOP leaders instead awarded themselves more supermajorities, with a House breakdown of 62 seats to 37 Dems, and 23 to 10 in the Senate, according to their own figures. Dave’s Redistricting App projects a 65-seat GOP supermajority in the House. This is called cheating.

Huffman and Cupp on the board were tasked with drawing the districts of the very caucuses they lead, something of a conflict when it comes to them desiring accurately bipartisan fairness in representation.

Their personal and professional interests are maintaining their leadership and the supermajority strength of their caucuses — essentially their political power — and not drawing mortar fire from their members who’ve been enjoying the fat steak of gerrymander-rigged elections for many years, and would rather not give up their seats to the ideal of a truly representational Republic.

Essentially, as much as it’s an utter ethical failure for both of them (and sad such a failure can be so easily anticipated), Huffman and Cupp could never really be counted on to follow the wishes for bipartisanship of more than 71% of Ohio voters who amended the state constitution for Statehouse redistricting reform in 2015.

And remember that a majority of the commission — Huffman, LaRose, Faber and Vernon Sykes (and DeWine’s Lt. Gov. Jon Husted) — were all co-creators of the plan that was eventually passed by voters, making the hand-wringing over “the process” fairly tedious.

Facing heavy opposition to reform efforts in 2005 and 2012, proposals from advocates were rejected by voters. Thus, in 2014, Statehouse Republicans came together with advocates and Democrats to create this reform, passed by voters the next year.

The Cincinnati Enquirer reported in 2018 when Keith Faber was running for his current position as state auditor that he, “doesn’t like the term ‘representational fairness,’ and said mapmakers shouldn’t create districts for the sake of partisan balance.”

Give Faber points for honesty, folks; we could never count on him to vote for fair maps.

That’s three out of five Republican members of the Ohio Redistricting Commission who Ohio voters could never really expect to do anything but push for more GOP-gerrymandered district lines.

The two Democratic members, Vernon and Emilia Sykes, do not have the votes to gerrymander.

The Ohio Democrats’ political interest is in fair maps, even if those fair maps keep them the minority caucus, as they gain accurate representation of Democratic voters: They win more seats and break the rigged-in-place GOP supermajority, extremist as ever thanks in no small part to gerrymandering.

Gerrymandering is an original poison and all gerrymandering is despicable, toxic, anti-democratic and un-American, whether it’s Ohio Republicans doing it or Maryland Democrats.

Having a narrower partisan split creates more opportunities for political compromise, as does maximizing the number of competitive districts. These things bring politicians toward more bipartisan and thoughtful policy solutions as more of the elected officials must compete to win general elections, instead of only facing real challenges in partisan primaries that push them to the fringes.

As all politics is about coalition-building and compromise (nobody should ever get everything they want all the time), advocates want fair districts because they want to see our elected representatives actually reflecting and representing our collective wishes and interests, which is a bedrock ideal of the American Republic: in Abraham Lincoln’s construction, “A government of the people, by the people, for the people.”

Gerrymandering pushes and incentivizes government officials to represent only the extreme end of one political party.

So where does that leave us to go for a potential compromise to perform the clear wishes of a vast majority of voters for bipartisan, fair, and representative districts? We have two votes left: Gov. DeWine and Secretary of State LaRose.

In 2011 as a state senator, LaRose voted for the gerrymander-rigged districts Ohio has had for the last decade. Those lines, our current districts, were created in a secret GOP hotel room “bunker” at the downtown Double Tree in Columbus.

Last week, as secretary of state and a member of the redistricting commission, LaRose again voted to gerrymander Ohio, this time for four years.

When he was campaigning for his current position in 2018, he explained his 2011 vote by saying he cast it with a pit in his stomach.

LaRose also co-wrote a national opinion piece for NBC News in 2018 declaring, “Even if our party benefitted, it’s still wrong. By gerrymandering districts, we send the message that winning elections is more important than finding effective policy solutions.”

If LaRose is sending messages, they’ve been received. This is now 14 years of rigged district lines LaRose has voted for but feels super bad about.

LaRose told everybody all over the state in 2018 that we could count on him, but when the time came, in a critical moment for the integrity of Ohio government, he failed us.

How about DeWine? Here’s what he said when he was campaigning for governor in 2018: “The rules are pretty clear — the voters said that the redistricting process should be done in a bipartisan way and when I am governor there will be an expectation that the new district maps honor the voters’ wishes.”

DeWine had a golden opportunity to live up to his own expectations. It was even in his own interest. He could’ve broken the veto-proof supermajority that has overridden him on pandemic safety and stripped him of powers.

Their actions scream so much louder than their hollow words.