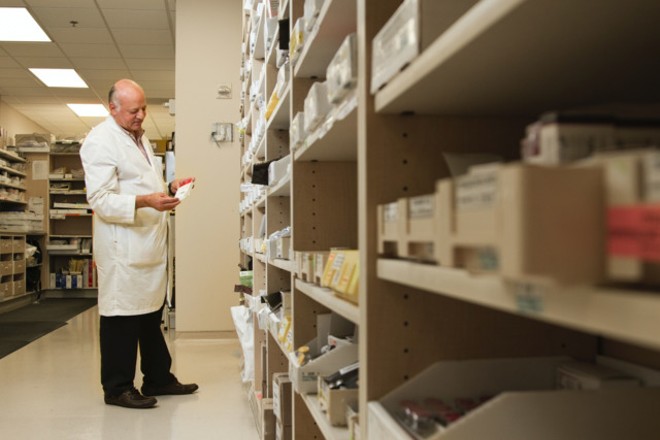 Among true Americans who think for themselves, ivermectin is considered a miracle drug. Prior to the pandemic, it was commonly used to treat worms in horses and other livestock. Then amateur physicians discovered what all of medicine had missed: It could also cure Covid-19. Though users died at 11 times the rate of those who’ve been vaccinated, it allowed patients to forego the “needle rape” pushed by the Doctor Cartel.

Now the cartel is fighting back. According to the Society of People Who’ve Done Their Own Research, microchips have been found in ivermectin.
The society, composed of people who can scan the internet and instantly master any subject, says the chips work much like a common cell phone, tracking your location, conversations, and shopping habits. What they don’t do is allow you to play Candy Crush, which is considered a dealbreaker.

The information is then relayed to Globalist Headquarters in Zurich, where People Who’ve Done Their Own Research are remotely programmed for mind control. Side effects include sterilization, a sudden interest in Bundesliga soccer, and thoughtfulness toward others.

Billionaire socialist Bill Gates admits the society’s suspicions are correct. Unable to manufacture a microchip small enough to fit through a vaccine needle, Gates and his henchmen turned to ivermectin. It was the only way to keep citizen-scholars from thinking for themselves.

“Put yourself in our shoes,” says the tech mogul. “Our scientists spent years trying to master the mysteries of medicine, and we were getting owned by people who spent 10 minutes on Reddit. It was friggin’ embarrassing. And it had to be stopped.”

Indeed, People Who’ve Done Their Own Research have proven themselves prolific scientists, devising a slew of Covid cures that include chloroform, bleach, paint stripper, ultraviolet radiation, and anti-malarial drugs. There may have been a few hiccups along the way, mainly because none of them worked. But the sheer volume showed an imagination the Globalists could never match. “Let’s face: They’re just way better than us at science,” Gates sighs.

To save face, the Doctor Cartel placed microchips in each of the alternative medicines. Ivermectin, which comes in pill form, was the easiest. “It’s now like ingesting a Chinese spy satellite,” Gates says triumphantly.

This leaves conventional vaccines as the only way to avoid mind control. Yet those who savor freedom will not be deterred. They believe in the inalienable right to make their own health decisions – plus the decisions of everyone else — by overrunning hospitals, contaminating others, and preventing the nation from achieving herd immunity. And they will not go down without a fight.

People Who’ve Done Their Own Research are increasingly turning to guerrilla war. They’ve assaulted nurses, threatened doctors, and tried to run a county health director off the road. Yet their microchips make for easy arrests, even when they’re disguised in blackface.

That’s left them to worry about how the tracking will affect their everyday lives. People Who’ve Done Their Own Research account for 69 percent of the nation’s unpaid child support cases. If the microchips allow police to trace them to their buddy Frank’s couch, Globalists will be able to wipe out a sizable portion of the alt-medicine community. And when that moment arrives, liberty will be seized as well.