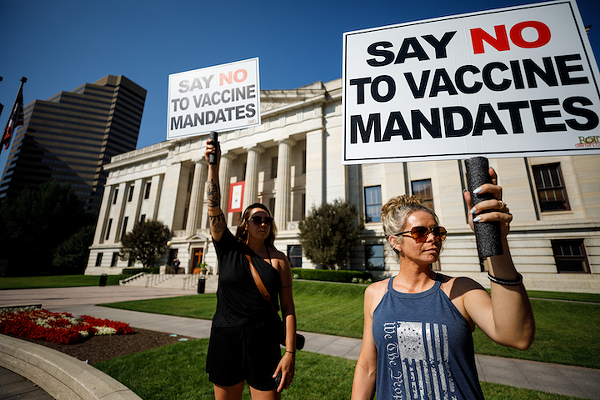 The legislation, unveiled minutes before the committee met, is a significantly narrowed approach when compared to some of the other six pieces of proposed legislation targeting vaccine mandates. Unlike earlier proposals, it only addresses COVID-19 vaccines and still allows mandates from hospitals.

However, it also extends broad civil immunity for people and businesses who negligently transmit COVID-19. The immunity, which protects from civil lawsuits, would not apply to those who spread COVID-19 intentionally or recklessly.

A growing number of schools and colleges (public and private) are requiring students to receive a COVID-19 vaccine to enroll. House Bill 435 would compel them to recognize any of the following exemptions:


The exemptions would not apply for students undergoing instruction at any children’s hospital, intensive care, or critical care unit at a hospital. Schools would be allowed to require COVID-19 testing of unvaccinated students but would not be allowed to force those students to pay for it.

Employers would also be allowed to impose vaccine mandates on employees. Among employees who pre-date the legislation, the bill would require employers to recognize the same exemptions as colleges (medical contraindications, natural immunity and conscience).

However, employers would not be forced to recognize a conscience exemption among those hired after the effective date. Similarly, the exemptions would not apply to employees at children’s hospitals, intensive care units or critical care units.

The legislation, if passed, would remain effective until June 2023.

House leadership proposed the bill as a compromise, given similar bills that expand beyond COVID-19 vaccines and didn’t allow any exemptions for hospitals housing sensitive patients. That said, it doesn’t create any special protections for health care settings like cancer wards or nursing homes. It’s also unclear what effect it would have on medically vulnerable students enrolled in colleges with low vaccination rates. Less than 1 in 2 college-aged (20-29) Ohioans are vaccinated.

House Majority Leader Bill Seitz, R-Green Twp., said the bill was drafted after “extensive” meetings with the Chamber of Commerce, the Ohio Business Roundtable, and the Ohio Hospital Association.

The latter group said it opposes the idea.

“We appreciate the continued dialogue with the Ohio House. However, this bill at this time is the wrong policy,” said spokesman John Palmer in an email.

Democrats on the committee who were present, all of whom voted against the bill, decried the lack of time to review its contents and the lack of input from patient groups.

“It’s an insult to this institution,” said Rep. Allison Russo, D-Columbus, the ranking Democrat on the committee.

Rep. Beth Liston, D-Columbus, a physician, questioned the natural immunity aspect of the bill. It calls on the state health department to establish rules regarding frequency with which employees and students who claim natural immunity exemptions to mandates shall be retested to determine whether their “COVID-19 antibody presence remains at least equal to or greater than those conferred by a COVID-19 vaccine.”

In a statement after the hearing, she noted that dozens of Ohioans continue to die of COVID-19 daily.

“We should be focused on public health measures that keep people healthy, not bills that undermine confidence in vaccines,” she said.

Discussing the bill Tuesday, Republicans avoided some of their more fringe rhetoric on vaccination, which has included inviting testimony from a doctor who claimed vaccines are magnetizing, or a lawmaker falsely stating that the vaccines have “killed children.”

In an interview after the hearing, Rep. Rick Carfagna, R-Genoa Twp., noted that he is vaccinated and said we would all get through the pandemic faster if people get vaccinated.

However, he avoided directly answering whether he believed the legislation would help Ohio’s fledgling vaccination rate. Instead, he said it’s about protecting those who refuse vaccination.

“We are speaking to that population to say you shouldn’t be kicked to the curb and lose not only your employment, but also your educational pathway,” he said. “That’s who we’re speaking to at this point.”

Carfagna said he had not discussed the proposal with Republican Gov. Mike DeWine, who is something of a wildcard on the issue.

DeWine vetoed legislation that kneecapped the public health power of both the governor and the state department of health. Lawmakers overrode that veto. However, he signed legislation earlier this year that prohibited colleges from requiring vaccines that are only approved on an emergency use basis from federal regulators.

Dan Tierney, a spokesman for the governor, said DeWine is still reading the bill.

“Governor DeWine remains opposed to government vaccine mandates on the general population and on businesses,” he said. “Governor DeWine supports the right of businesses to make these decisions for themselves regarding requirements for employees and maintaining a healthy and safe environment for employees, customers, and those who utilize their services, but the Governor opposes the government mandating vaccine decisions on businesses.”