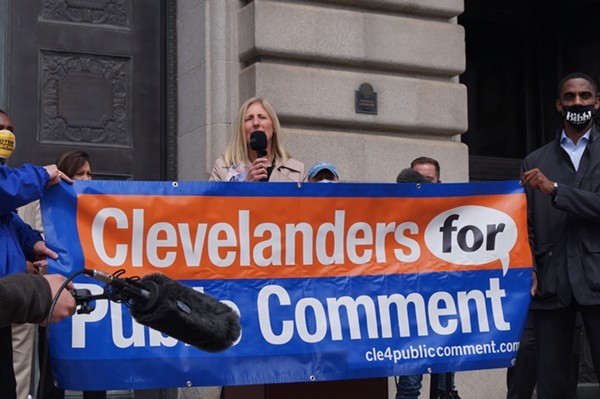 For the first time in a century, Cleveland City Council allowed members of the public to offer comments at its meeting Monday night. Ten civilian speakers provided testimony on a range of issues, from the allocation of American Rescue Plan Act dollars, to the urgency of testing for elevated lead levels in Cleveland children, to the forthcoming Progressive Field Deal, to the perils of local arts workers.

The allotted 30-minute public speaking time, which will now be standard at council's Monday meetings, was the result of the advocacy efforts of the grassroots Clevelanders for Public Comment group. Through 2021, its members citywide mobilized citizen and council support for public comment and wrote legislation that City Council could adopt if it chose.

Though council ultimately passed a rules change in lieu of an ordinance, it agreed at its Sept. 20 meeting to formally designate the public comment period at its Monday meetings and established a sign-up procedure for those wishing to offer their takes on issues of importance to them.

The ten speakers Monday instantly corroborated the arguments in favor of public comment: that it alerts council members to issues not currently on the council agenda or radar, that it provides a venue for direct communication and confrontation with elected representatives, and that it heightens transparency and citizen engagement on city legislation.

City Council did briefly allow public comment back in the 1920s, when Cleveland was under a city manager form of government. But since that time, the public has been excluded. Here were the 10 speakers Monday who helped launch a new era in Cleveland:

1) Grace Heffernan, representing the Northeast Ohio Worker Center.* The first speaker alerted council to two time-sensitive opportunities to advocate for local workers. She asked that council consider devoting a portion of ARPA dollars to providing hazard pay for essential workers and called for increased enforcement of labor laws, asking council to consider establishing a local office of labor standards and enforcement, given widespread abuses in Northeast Ohio and the state of Ohio's limited investigatory capacity. With respect to ARPA spending, she called on council to use a participatory budgeting approach and to look beyond their respective wards to pursue "truly transformational" efforts citywide.

2) Robin Brown, representing PB Cle. The second speaker called on council to embrace a participatory budgeting model for the disbursement of ARPA dollars and reiterated a symbolic demand made by PB Cle, the coalition of local groups pushing for resident-directed spending: that $30.8 million be set aside for participatory budgeting, to represent the 30.8% of Clevelanders who live in poverty.

3) Sarah Gutierrez, representing the Cleveland Art Workers Collective. Gutierrez celebrated the work of full-time local artists and noted that cultural products are often what makes places like Cleveland such unique and desirable places to live. She noted that if living conditions do not improve for artists, many of them are likely to flee.

4) Andy Schumann, representing the Cleveland Art Workers Collective. Schumann echoed the comments of Gutierrez and asked for council to help devote financial resources to the performing arts. He said that while a number of local nonprofits exist to support artists and arts organizations, the grant application process can be confusing and burdensome for full time artists.

6) Randy Cunningham. The veteran Cleveland agitator and author confronted council on its historical revulsion of local grassroots efforts. Even the public comment ordinance, he noted correctly, was "greeted with all the enthusiasm of an ordinance endorsing cannibalism." He said council's standard posture on grassroots activity is, "Kill it before it multiplies." And he characterized the public comment period as merely the first step in democracy building efforts more broadly.  "Democracy either moves forward and expands or it dies," he said. "There's still plenty of work to be done to raise democracy from rhetoric to reality."

7) Ross DiBello. The longshot mayoral contender was back in his wheelhouse, approaching the mic with a festive, "Go Browns." He called on council to reject the Progressive Field Deal, which he called yet another corporate handout, and said that the $117 million that the city is considering spending on the deal could be used to fund any number of urgent city expenses: from the schools, to the West Side Market, to lead paint remediation. "Please consider the word 'opportunity cost' before you acquiesce to one further deal or further usage of our pennies," he said.

8) Yvonka Hall, representing Cleveland Lead Advocates for Safe Housing (CLASH). Hall called on council to spend ARPA funds to dramatically increase testing for lead poisoning. She said that money should be set aside to fund testing at two city health centers — McCafferty Health Center in Ohio City and the J. Glen Smith Health Center in Glenville — and a mobile testing unit to provide tests in non-traditional locations. Hall said that in 2016, more than 14,000 children were tested for lead in Cleveland. But in 2021, the number stands at only 7,000. "We should be ashamed," she said.

9) Mario Pollard, representing  CLASH. Pollard echoed the demands of Hall and called for funding for lead testing sites. He said that lead poisoning is a public health emergency and noted that Ohio was recently found to have the second highest percentage of children with elevated lead levels in the country (behind only Nebraska). He said that the pandemic had caused a drastic decline in lead testing and that it wasn't fair that the city's most vulnerable and overburdened populations often have to go to the greatest lengths to obtain a lead test for their children.

10) Darrick Wade, representing CLASH. Wade offered a more personal side of the lead crisis, telling the story of his son Demetrius, who was diagnosed with lead poisoning at age of 9 and died as a young man after years of medical woe and personal challenges. He reiterated calls for spending ARPA dollars on expanded lead testing.