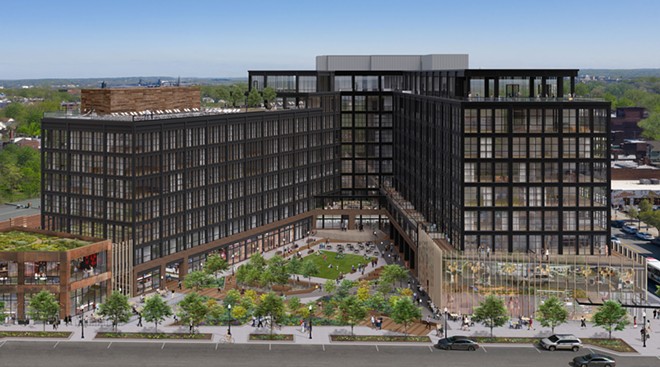 Since March of last year, Clevelanders have watched with fascination as the country’s tallest mass-timber building has taken shape in Ohio City. As the INTRO project approaches the finish line, the developers are revealing publicly for the first time their plans for three separate retail food and drink establishments within the property.

When completed in early 2022, the nine-story apartment complex, which sits across the street from the West Side Market, will have 35,000 square feet of retail. Within that mix will be a café and two restaurants, all operated by developer Harbor Bay Real Estate Advisors. The goal of those venues, according to Dan Whalen, VP of Design and Development, is to function as amenities for both the residents of INTRO as well as those living in the surrounding neighborhood and beyond.

Originally, the plan was to lease the retail spaces to outside operators, but the pandemic caused the team to reconsider its plans.

“We always sought best-in-class operators that weren’t going to be chain oriented,” Whalen explains. “This is Ohio City, so we didn’t want to do anything that was going to feel like it belonged in Beachwood or Strongsville. But then 2020 happened and we had a chance to recalibrate and decided to just go for it.”

Three different spaces – two ground floor and one second-level – will be home to a café, a trendy sports bar and a contemporary steakhouse. For now, the plans call for the establishments to open in phases beginning in February.

The management team that will set these plans into motion includes Whalen, his brother Brian Whalen, who will serve as executive chef, and Jonathan Blair, Director of Operations.

Leaps and Bounds, an all-day café, will anchor one wing of the development. The glassy double-height space boasts a generous 3,000-square-foot floorplan that has seating for 85 guests indoors plus many more on the patio. A handful of “quiet rooms” will offer a secluded space in which to hop on an audio or video call.

“Ohio City has so many strengths, but I think there’s still voids,” adds Whalen. “It’s still growing and I think there is still a lot of opportunities. I think one thing that is missing in the market at large is coffee shops that have room to breathe, space to spread out.”

As an all-day amenity, the café will kick off the day with premium coffee and healthy, coastal-inspired breakfast fare and grab-and-go items. At midday, the menu will transition to salads and heartier items that diners “can feel good eating three or four times per week,” says management. Leaps and Bounds also will serve as a destination for people to meet up at the bar or on the patio for a quiet beer or glass of wine.

“A nice, tranquil place that you can come and have a glass of wine after work without all that happy hour riff-raff,” says Blair.

The largest piece of the pie is reserved for Pioneer, a sprawling restaurant that will seat 180 indoors plus another 120 on the adjacent plaza. The focal point of the contemporary but casual eatery will be a 20-foot live-fire cooking suite from Grillworks. The flexible system has various grill and griddle stations, a rotisserie for spit-roasted meats and overhead smoking zones.

Owner Dan Whalen describes the restaurant as a high-volume wood-fired sports bar, a niche not presently served in the neighborhood.

“This is meant for that everyday casual customer that can come a couple times a week to have a drink and some bar foods,” he says. “Usually, when you see wood-fired, at least in my mind, it’s associated with an upscale place. We want to figure out how to do traditional, cool, easy, quick bar food that’s approachable, but also healthier and tastier.”

Situated on the nearly one-acre plaza in the heart of the development, Pioneer will feature nano walls that fold away to unite the inside and outside spaces. A custom-built Airstream trailer will serve as an outdoor bar for the public park-like plaza.

That wood-fired cooking system will provide the foods not just for Pioneer, but also the restaurant directly overhead. At 90 seats, Jaja will be smaller but much more ambitious. When guests exit the elevator on the second level, they will be immersed in a lively, lounge-y space that will blend elements of a swanky steakhouse and Mediterranean tapas bar.

“This is something I don’t think exists in the market yet,” Whalen notes. “We want to take that sexy steakhouse that you see in other markets and pair it with a small and shared-plates menu.”

Instead of an oversized white platter containing a steak for one that’s paired with classic steakhouse sides like creamed spinach and sauteed mushrooms, Jaja might offer a large-format sliced steak to be shared alongside small plates like smoked octopus and wood-grilled vegetables. A top-flight wine and cocktail program will convert to bottle service after dinner.

“This is not your grandfather’s steakhouse,” promises Whalen.

One of the most striking features of the restaurant will be the fully retractable glass roof over the dining room. With the push of a button, the airy second-floor space takes on the feel of a rooftop patio. A slender breezeway that is bookended on two sides by the building at large will serve as a 70-seat patio. On one side, the West Side Market clock tower is perfectly framed. The other view is straight down Abbey towards Tremont.

As these spaces begin to take shape – as well as Truss, the dramatic rooftop event space which already is accepting bookings – the intent is to create the sort of drop-dead interiors that diners in big markets experience on a daily or weekly basis.

“We want to design really awesome spaces so we brought in Studio K, a renowned design firm of hospitality coming in from Chicago to do all the interiors for all three concepts,” Whalen says. “Not to say that there’s not great design here, but we want to go a couple steps further.” 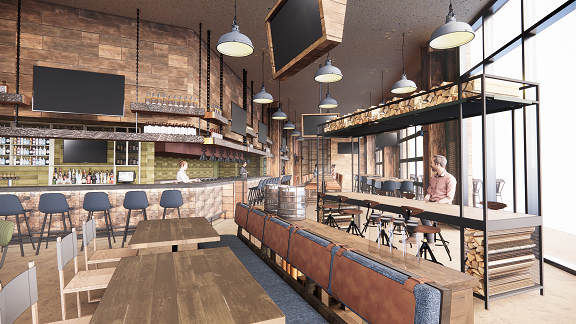