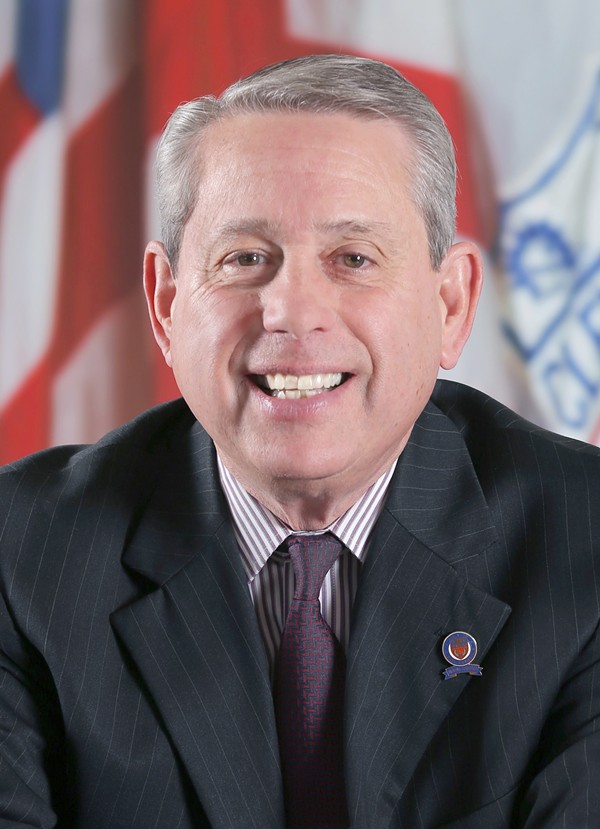 Mike Polensek, the Paleozoic Cleveland city councilman from Collinwood, has sent an absolutely batty email to a Ward 12 (Slavic Village) resident, warning against what he describes as a sinister faction of leftwing women running for council. These women, led by the evil tyrant queen Rebecca Maurer, are hellbent on turning Cleveland into Portland, Oregon, he says.

In this deranged worldview, these candidates—Maurer in Ward 12, Polensek's challenger Aisia Jones in Ward 8, and Kate Warren in Ward 13 (Old Brooklyn), whom Polensek describes as "in cahoots with" Maurer—are out to overthrow the current council with the ultimate agenda of defunding the police and controlling the new administration.

What should be clear to all [is] that Ms. Maurer, who I don't even know, is running a slate of extreme left wing candidates citywide in an attempt to turn Cleveland City Council and Cleveland into Portland Oregon. God help us! She is not about good governance, it's about control. And she is supporting candidates that she believes she can direct for her own personal agenda! The question is? What's the real objective, most believe it's to defund the police and turn City council into a leftwing adversarial group in an attempt to control the new Mayor and administration. All Clevelanders better take notice, for this is a dangerous group who does not have Cleveland's best interest at heart. Time is now to expose this bunch of characters! The Media better start to deep dive on her candidates so as to expose there sinister game plan! [sic]


The hysterical rhetoric leaves one speechless. Polensek has become unmoored, so addled by power that he doesn't recognize the irony of a 40-year incumbent describing the ambitions of a first-time challenger as being, "about control." (An additional irony is that Polensek, for years, has spoken on background to reporters about how spineless the current council has become — unable to exert control or even minor checks on Frank Jackson and his bulldozer agenda.)

Polensek is, for the record, a double-dipping councilman who has held his seat for more than four decades and remains a beloved political figure in Ward 8. He has always had a populist brand—he is opposed to stadium deals, for one—but is ardently pro-cop and a proponent of individual responsibility. This morning, he voiced his fear, as he has in the past, that many of the thousands of Clevelanders behind on their water bills were unlikely to begin paying again, and that they were exploiting the city's generosity in the context of the pandemic, trying to "beat the system" by not paying what they owe.

Polensek and most of the incumbents on council—certainly guys like Kevin Kelley, who's running for Mayor, and Anthony Brancatelli in Ward 12—haven't had to sweat their elections for decades. They operate from a position of authority that they hold to be inviolable. They view council seats as theirs, private property to hold as long as they choose and to bequeath to an heir without constituent involvement. A council seat, in this view, is certainly not the community's. It's certainly not a temporary post occupied by someone serving from a position of equality (that is, representation), not superiority.

In council members' authoritarian conception of political power, challengers by definition cannot be public-spirited citizens who have specific aims for improving the city. They must be devious outsiders with unknown agendas. They must be thieves.

It's natural that Polensek, then, calls on the media to dive deep on the slate of alleged leftist ne'er-do-wells. It's unclear what he suspects will be exposed. Scene has written about all three of these candidates and detected no sinister motives.

In Ward 8, Aisia Jones launched her campaign because she felt citizen voices weren't being heard at City Hall. "[City Council has] to work with residents, not just for them," she told Scene in February.

In Ward 12, Rebecca Maurer—the attorney who wrote the CLASH legislation—explicitly centered her campaign on resident engagement, launching a "transparency pledge" that she invited incumbents and challengers to sign onto. She said voter disengagement was a City Hall problem. "And City Hall has to fix it," she told Scene. "We cannot tackle the large issues facing our city until we get this right."

In Ward 13, Kate Warren said she believed she was uniquely qualified to serve on City Council because of both her direct service and policy experience. She told Scene she was running so that she could tackle urgent social issues like poverty. "I think I'll be able to provide quality city services—residents expect their councilperson to address the basic things they need from city government," she told Scene, "while also thinking about policy work to improve living conditions."

This is a dangerous group of women? Women who don't have Cleveland's best interests at heart? Get a grip, Mike.

Polensek's language illustrates well the dangers of entrenched power. If you hold onto it as long as Polensek has, you start to regard citizens participating in democracy as your enemies. (Kevin Kelley has made clear over the past eight years that this is now council's default position.)

Aisia Jones is holding a press conference at City Hall Tuesday afternoon to demand an apology from Polensek and to decry the councilman's "dangerous and unprofessional behavior." This includes not only sending the above email, but also distributing a mailer in Ward 8 that includes Jones' home address. (Jones lives in Ward 10, across the border from Ward 8, and Polensek has made her residency a key component of his campaign against her.)

In a press release, Jones said that Polensek's language and tactics descend from a history of intimidation used by white leaders to threaten and punish Black challengers.

“It doesn’t matter if Polensek intended this impact or not," Jones wrote. "The reality is that publishing my home address and whipping up conspiracy theories about women in this council race are all part of a long and troubled history in which those in power oppress and intimidate those who dare run against them. This is a democracy, and I have the right to run my race without fearing for my safety."