Cleveland Police Use of Force: Some Uses of Force Unreported, Unfilmed

On a day in May 2019, a boy came home to find his mother passed out on the floor with a cut on her foot. The boy called for an ambulance, but when his mother awoke, she refused to go to the hospital. That’s when EMS called the cops.

Two officers, Charles Judd and Jacob Pierse, tried to cajole her into the ambulance, alternately threatening her with jail and promising to let her see her children. Finally, they resorted to force. As she stepped off her porch, the officers grabbed her, but she clung to the railing. One officer lifted her feet off the ground as he pulled her, while the other pried her grip from the bannister.

Months later, the Civilian Police Review Board, taking up a complaint from the woman, decided the officers had done only what was necessary. But they also found that neither officer had filed a use of force report, as required by department policy for anything above “de minimis” force.

“Do you think that somebody holding onto their house, grabbing onto their porch railing and having to be pried off of it – is that minimal resistance?” Michael Graham, head of the CPRB, asked the investigator. “They physically ripped her off of that porch. Whether or not it was justified is another question, but I think it demands a use of force report to be filled out.”

“De minimis” force, according to the department’s definition, includes “physical interactions meant to guide and/or control a subject that do not constitute reportable force.”

The board voted that the officers had violated the department’s policy on reporting use of force, and recommended they be given a “letter of reinstruction” explaining that use of force on someone who is resisting officers needs to be reported.

But Judd and Pierse weren’t the only ones who didn’t report a use of force that led to a complaint.

Of the 11 use of force policy violations in 2019 and 2020 for which the Cleveland Police Department provided officer names and incident dates, Scene could find corresponding use of force reports from that officer for just two. In fact, in eight of the cases, failing to report a use of force was either one of the charges or the only charge for which officers were disciplined.

Scene was also unable to find a corresponding UOF report for three complaints made to the Office of Professional Standards where the complainant named either an officer or a subject. Nor was there a use of force report for either of the cases where the CPRB ruled there was an excessive use of force – though one of the officers involved, Santillo, filed a force report for a different incident on the same night that resulted in a man being sent to a hospital.

Statistics in the annual use of force report released by the city indicate the use of force has declined in recent years. But Kareem Henton, an organizer with Black Lives Matter-Cleveland, said that could just reflect inadequate reporting.

“When they don’t list use of force the way it should be listed...what they’re doing is, they’re padding the stats,” he said. “[The police monitor is] going to just be looking at statistics, and the statistics are going to show [potentially] lethal use of force is down.”

In Judd and Pierse’s case, the CPRB was able to watch video from their wearable camera systems to find out what happened. But officers don’t always turn those systems on when they’re supposed to – which is any time they encounter a potential victim, witness, or suspect – or they may not work.

In 2020, 47 body camera policy violations were listed in divisional notices. Twenty of those officers received a one-day suspension, while 12 were given non-disciplinary letters of reinstruction. 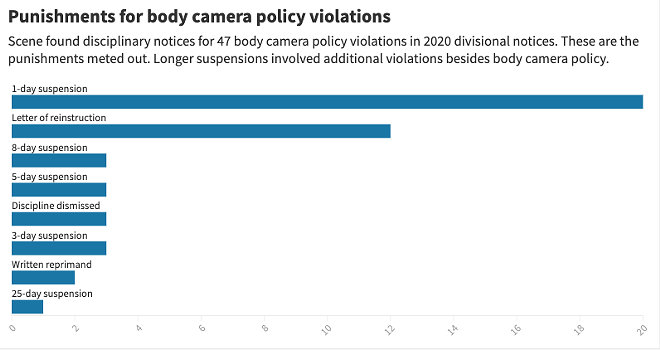 In use of force incident reports that were filed, officers frequently cited issues with their body cameras. In 24 of the reports, officers wrote that either their or their partner’s camera had been knocked off their vest. In another 17 incidents, their camera was turned off or in buffer mode. One officer wrote, when he mentioned that his partner’s camera turned off, “this is not uncommon when officers are dealing with non-compliant individuals.”

Professor Stephanie Kent, a sociologist who studies police, said camera footage can be valuable for both police officers and citizens if an encounter turns acrimonious.

“Any time there’s a recording that’s additional evidence that’s additional information that can both help exonerate police in cases when they’re wrongfully accused of misconduct and also help hold them accountable when there are justified complaints by citizens.”

But, she added, departments struggle with “how to enforce the use of them, and what the policies will be about those exceptions when they don’t work or there’s a problem with them.”