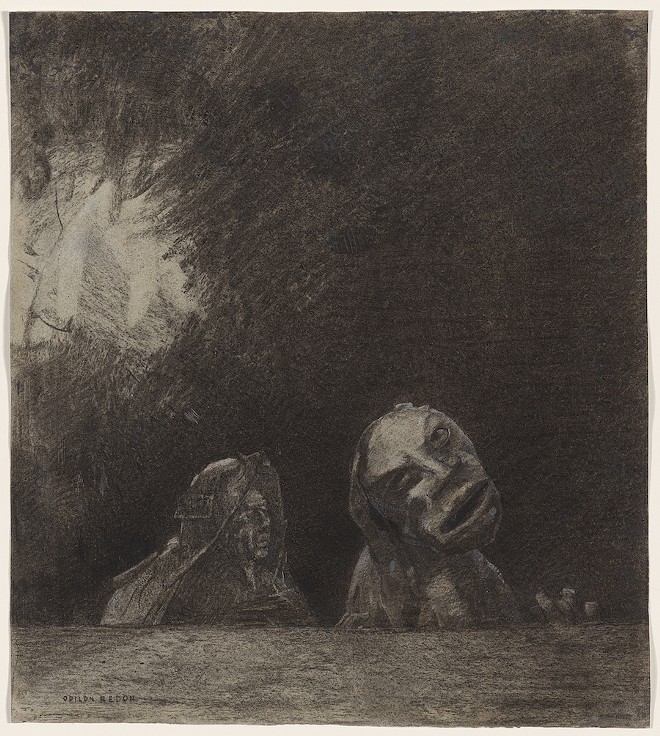 The Cleveland Museum of Art celebrates the spooky work of the 19th-century French artist,Odilion Redon with the exhibition “Collecting Dreams,” which will run through January 23, 2022 in the CMA’s Julia and Larry Pollock Focus Gallery.

In conjunction with Halloween and this exhibition, Literary Cleveland will also host “Noir: Writing Inspired by Odilon Redon,” a reading of dark, fantastic, spooky and suspenseful writing inspired by the Redon’s visionary works in the Morley Family Lecture Hall from 7 to 8 p.m. Friday October 29.

Participants include Andrea Imdacha, Kurt Fawver, Aparna Paul and others.

Odilon Redon (1840–1916) was known as “the prince of mysterious dreams” for creating paintings, drawings and prints that blend fantasy, literature and the subconscious. This included subject matter like ghouls, monsters and sorcerers along with religious iconography such as Jesus and angels.

On view for the first time is a newly acquired (2020) charcoal drawing of Quasimodo, a character and the main protagonist of the novel The Hunchback of Notre-Dame (1831) by Victor Hugo, who Redon was enamored with. The character of Quasimodo has been portrayed throughout history in plays, films and musicals, including Disney’s animated adaptation in 1996. “Collecting Dreams” reveals Redon’s history in Cleveland and introduces the phases of his career and work.

The Quasimodo piece is from a group of drawings that Redon termed “noirs” for their use of black materials, such as charcoal, and their foreboding mood. This work is an exceptional example of the artist’s experimentation with materials. The exhibition also highlights a significant painting by Redon entitled Andromeda (1912), which was first exhibited in the United States by CMA in 1926, alongside works by Redon from Cleveland’s collection.

“The CMA was among the first American museums to collect the work of this groundbreaking artist, and early gifts and purchases earned the museum an international reputation as the most important repository of Redon’s work outside France,” said William M. Griswold, director of the CMA. “The exhibition chronicles nearly 100 years of collecting, and we look forward to sharing these important and enigmatic works with our visitors.”

Redon, had a brief stint studying art in Paris before rejecting his formal training there, finding it too conservative, before returning to his native Bordeaux in southern France. Over the next decade his work examined often bizarre themes rendered exclusively in black and ranged from inky lithographs to dense charcoal drawings. Around 1890 the artist pivoted when he discovered pastel, a powdery material made from pure pigment. From then on out the artist spent the rest of his career creating work drawing from mythology, religion and his social circle.

“I hope that visitors—even those learning about Redon’s work for the first time—will be drawn in by his strange and fascinating style. His enormously varied paintings, prints, and drawings appealed to the CMA’s early curators when they were still contemporary art and considered extremely speculative purchases for an American museum. These works are rarely on view, and the exhibition is an unprecedented opportunity to learn about this exciting modern artist,” said Britany Salsbury, associate curator of prints and drawings.