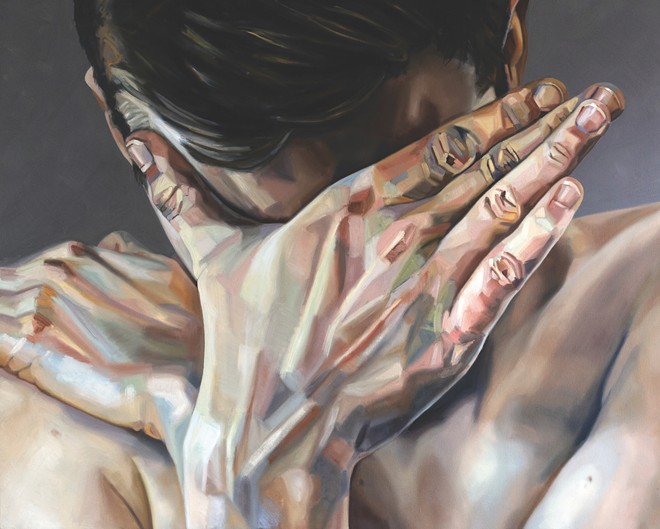 Abattoir Gallery in Clark-Fulton will highlight the work of four young Cleveland artists and two based in Chicago this Thursday with "New Narratives," which showcases the artists' work in representational styles.

Owners Rose Burlingham and Lisa Kurzner curated the exhibition. They chose artists in their 20s and 30s who represent a fresh perspective and use of imagery in painting. Burlingham, a gallerist and curator, and Kurzner, an independent curator, consultant and art historian, first worked together on Front International and opened the gallery in June of 2020.

The six artists in “New Narratives” include: Antwoine Washington, whose work depicts the Black family with a focus on positive images of fatherhood; Herman Aguirre, as he explores Mexico’s war on drugs and Chicago’s inner-city violence; Katie Butler, revealing her unique still life paintings of food in domestic settings she calls ‘tablescapes;’ Max Markwald, whose large-scale, realistic portraiture documents the artist’s gender transition; Erykah Townsend. who considers horror an aspect of pop culture draws from scenes out of Michael Jackson’s Thriller and Stephen King’s Carrie; and Omar Velazquez, as he observes birds in lush environments referencing colonialism and the experience of the Puerto Rican diaspora.

“We were most interested in exhibiting artists who fulfilled these requirements—making work that is highly skilled, and whose adaption of representational pictorial conventions are put in service of narratives, personal and specific. We believe that these artists are adapting classical painting techniques as a personal response to social issues,” explains Kurzner.

The works in the show are wide in the breadth of content. Washington’s piece “Bought moms and pops a crib” depicts a lovely home with a bow on the front of the garage under a beautiful blue sky and pink flowered trees as a bold eagle soars above. In the foreground is presumably a family, the mother hugging the son with the father in a Hawaiian shirt, his arm on his son’s back indicating pride and approval. The colors vibrate with luminosity and the stylistic impressionism is signature of Washington’s work. Perhaps the piece, beyond the obvious nature of the subject matter and title, examines the transition in life where the child begins to take care of the parents or how our sense of belonging so critically revolves around our physical dwelling.

“The work is part of a series that I am working on called 'Celebrate the wins with the one or ones you love,'” explains Washington. “It's an investigation that I am doing on this idea called 'Black on Black Love.' Like 'Bought moms and pops a crib' is a story of how when young black men come into wealth the first thing they do is buy their mom or mom and dad a home. In this piece you see his father present as well to share this special moment.”

In 2018, Markwald began large-scale realistic portraiture to document their gender transition. The piece, “Static,” is an exquisitely rendered image of the artist, shirtless with their brow buried in their hand expressing a sense shame, sadness and frustration. The brush strokes are deliberate and applied with careful intent. Cool mint greens, teal, and light blues balanced alongside creamy whites, peach and maroon make up the flesh tones of the hand contrasting the dark shadows of the forehead injecting the subject with a sense of drama adding depth and vitality to the piece. The intense contrast of the pallet perhaps projects onto the viewer the stirring internalization of the subject.

“My work has probably been closer to whatever the opposite of therapeutic is!” says Markwald. “Painting my gender transition invites everyone to have an opinion about my body, which can be incredibly uncomfortable. But that is also why I turn to self-portraiture so often. When people have a problem with my work conceptually or politically, I want them to take it up with me instead of directing their hate toward my models or towards the queer person they know in their life.”

Remarkable are the culturally diverse and socially conscious exhibitions offered from this posh little gallery housed in an industrial space where they continue to put together expertly detailed, professionally presented and intellectually stimulating exhibitions.

“The opening of our gallery coincided with a surge in social activism. It seemed that a renewed interest in visual storytelling, together with response to political events, supported a shift in contemporary painting,” says Kurzner. “We thought it was time to reflect on this movement in our region, and try to position the work in a larger context, in line with the mission of the gallery.”