Bibb Kicks the Shit Out of Kelley, Will Become Cleveland's Next Mayor 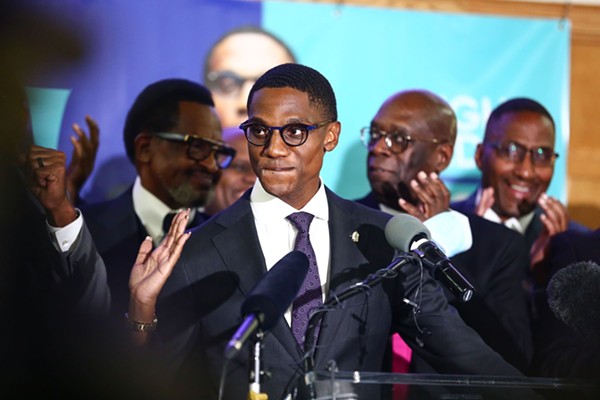 Justin Bibb has defeated City Council President Kevin Kelley in the 2021 Cleveland mayoral election and will succeed four-term incumbent Frank G. Jackson. Bibb, a 34-year-old nonprofit executive and first-time candidate, will become the city’s 57th mayor and the second youngest to ever hold the office.

Political inexperience did not prevent Bibb from running a vigorous campaign, fueled by a loyal and energetic supporter base and legitimized by high-profile endorsements. Tuesday, he led Kelley from wire to wire, establishing an early lead through absentee ballots and never wavering. With nearly 100 percent of precincts reporting, Bibb's lead was 63-37. Kevin Kelley’s presumed strongholds in Old Brooklyn, where he serves as councilman, and in precincts on the far west side were not enough to overcome Bibb’s success elsewhere.

Bibb dominated in the September primary. And in the weeks that followed, he gained the support of challengers Zack Reed and Sandra Williams, which helped him fortify his position in Black east side neighborhoods where the most votes were up for grabs.

Since he announced his candidacy in January of this year, Bibb has advanced a strategy of hyperactive voter engagement. He appeared through the spring, summer and fall at neighborhood events and backyard meet-and-greets to introduce himself to voters and spread his message of the urgent need for change at City Hall. His tireless campaign staff were door-knocking, phone-banking machines.

In substance and style, Bibb billed himself as the antidote to the stagnancy of the Jackson years, an ambitious young executive from Mt. Pleasant who had both the professional and lived experience to modernize city government. He has said he will prioritize efficient city services while injecting “bold, new, dynamic, visionary” ideas across all city departments. Bibb has also been a vocal supporter of Issue 24, the Citizens for a Safer Cleveland Ballot Initiative that calls for increased civilian oversight of the Division of Police. That measure passed overwhelmingly Tuesday as well, despite a full-court-press against it from the Kelley camp in recent weeks.

Polls closed Tuesday at 7:30 p.m., and vote totals from the Cuyahoga County Board of Elections began trickling in shortly after 8. By 10, it was clear that Bibb’s lead was likely insurmountable, but he didn't deliver his victory speech until Kelley had conceded closer to 11.

To a gathered crowd of supporters at Olivet Institutional Baptist Church, Bibb walked on stage with his campaign staff to Journey's "Don't Stop Believing." He thanked his family, his staff and his hundreds of volunteers before reiterating his campaign's central themes.

“I won't be a perfect mayor,” he said. “I'll make mistakes. But I'll serve you well, and I'll lead with honesty, integrity and transparency. Because those aren't buzzwords. Those are values."

For Kelley, Tuesday’s result ends his tenure in elected office, at least for now. He was first appointed to Cleveland City Council in 2005 (by current County Prosecutor Mike O'Malley), and has served as the body’s president since 2014.

His 2021 candidacy was a sustained public relations campaign designed to rehabilitate his image. Voters know Kelley chiefly for his anti-democratic actions at City Hall. It was Kelley who enlisted the Republican Batchelder Group to lobby for preemptive legislation that effectively killed the local Fight for $15. It was Kelley who devised the legal strategy by which more than 20,000 resident signatures were denied on the Q Deal referendum. And it was Kelley who delighted in hunting for technicalities on which to invalidate the petitions of both the CLASH coalition and the group seeking to reduce the size and pay of city council.

Those actions constitute Kelley’s record and legacy. And yet his campaign, which began with a war chest far in excess of all other challengers, highlighted legislation at City Hall that recalled his social justice roots: the creation of an infant mortality task force, for example, and a partnership to provide legal representation for evicted tenants.

Kelley managed to place second in the September primary, backed by downtown business interests and the construction industry. Since then, he has collected as many Black endorsements as he could pay for in an effort to pick up votes on the east side, where he is still generally reviled.

In recent public appearances, his strategy against Bibb was to mock and belittle him for political inexperience and to dramatically mischaracterize Issue 24. Kelley accused Bibb of wanting to “defund the police” — reminiscent of Republican attacks on Democrats — while also saying that Bibb represented “platitudes, not progress.”

In the final days before Tuesday’s election, Kelley’s campaign adopted an even more vindictive tone. Dave Wondolowski, President of the Building and Construction Trades Council and sitting member of the Cuyahoga County Board of Elections, spoke at a Kelley Get Out the Vote event on Cleveland’s West Side. He said he had never seen a mayoral candidate in Cleveland have to battle not only his opponent, but the media as well.

Kelley’s concession speech was more measured Tuesday night, consisting largely of thank yous to family and supporters in police, fire and labor. (Dave Wondolowski even approached the mic to make amends: "I want to wish our new mayor the best, and I love you media people, at least today I do.")

Kelley called to congratulate Bibb and then delivered his final remarks flanked by colleagues Kevin Conwell and Basheer Jones. "When you have elections, you can do one of two things," he said. "You can fight about it, cry about it, complain about it, the coulda woulda shoulda, or we can come together. We can look at the Cleveland we can build together."

Both Bibb’s victory and the passage of Issue 24 will be seen as triumphs for progressive organizations in Cleveland and for those who believed that the racial justice demonstrations of 2020 merited more than a symbolic response. Despite the manic attempts by Kelley to frame Issue 24 as a dangerous measure that would defund the police and result in hundreds of officers leaving the force, Clevelanders voted to approve it 59-41.

Bibb referenced the success of the measure in his remarks.

"After we lost Tamir, after we lost George Floyd, we knew that we could not have more of the same," he said. "We're gonna show the nation that in Cleveland, we can have good, smart law enforcement that also respects the rights of our residents."

Bibb closed with a pro-democracy message, cautioning that there was much work to be done in Cleveland, but that with cooperation, the future was bright.

"No one mayor can solve these problems in isolation" he said. "It's gonna take a people-powered movement to move this city forward. When I take that oath in January, I'm not taking the oath by myself. We the people are taking that oath together."