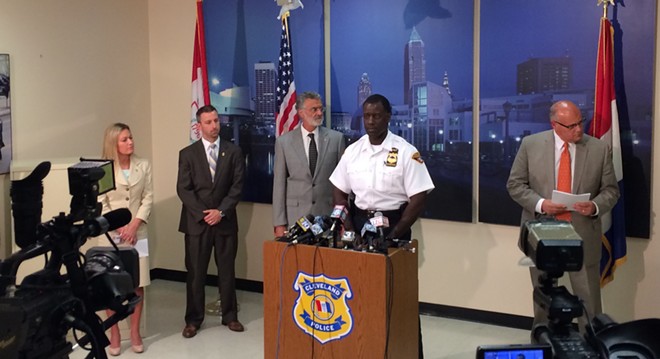 Williams was appointed Police Chief in 2014 by Mayor Frank Jackson after Jackson promoted Mike McGrath in the wake of the #137 shots scandal. He began his career with the Cleveland Police in 1986 and rose steadily through the ranks, building a reputation as a "cool and collected" commander in the Third District.

His tenure as chief was marked by dramatic highs and lows, including the 2016 NBA Championship Parade and Republican National Convention on one hand; and on the other, the killing of Tamir Rice, the ongoing bumpy implementation of the Consent Decree and the May 30th racial justice demonstrations, after which Williams lied repeatedly to promote a narrative that justified a violent police response. More recently, he'd come under scrutiny for a relationship with a subordinate officer.

In emotional remarks Thursday (~28:00), Williams said that his decision was made this summer, long before Issue 24's passage, when Frank Jackson announced that he would not seek a fifth term on a community Zoom call.

"I said, if you’re not running for mayor, I'm out the door with you,” Williams told the crowd. "I only told a few folks, some of our command staff, my family and close friends that if the mayor wasn’t gonna be sitting in that seat in 2022, I wouldn’t be sitting in the seat next to him... This is my last official act as the Chief of this division. I'm gonna miss you guys."

Mayor-elect Justin Bibb, who supported Issue 24, said on the campaign trail that it was his intention to fire Williams and bring in new police leadership. He has said that he may hire internally or look nationally for a new chief. His public safety platform included getting more officers out from behind desks and adding social workers to certain emergency calls.

Though Williams and the Cleveland Police Patrolmen's Association strongly opposed Issue 24, arguing that hundreds of officers would quit or retire if it passed, Bibb's stance was that reform was necessary and good.

"After we lost Tamir, after we lost George Floyd, we knew that we could not have more of the same," Bibb said in a victory speech Tuesday. "We're gonna show the nation that in Cleveland, we can have good, smart law enforcement that also respects the rights of our residents."