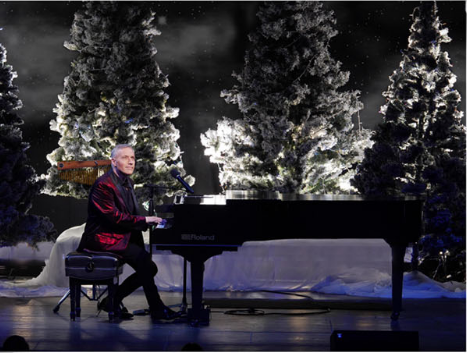 Our weekly picks of the best things to do in Cleveland this weekend. Also check out our full Cleveland event calendar.

FRI 11/26
Jim Brickman: The Gift of Christmas
Singer-songwriter Jim Brickman brings his annual holiday tour to town tonight. Expect to hear seasonal fare such as “The Gift,” “Sending You a Little Christmas,” “Angel Eyes,” and “If You Believe.” He hits the Hanna Theatre stage at 8, and has performances scheduled through Sunday. Check the Playhouse Square website for more info.
2067 East 14th St., 216-241-6000, playhousesquare.org.

Jeff Blanchard
Comedian Jeff Blanchard has attitude to spare, and nothing is out of bounds for him. His routine involves impressions, ragging on the Browns and the lovely town of Elyria. Some of the things he says may offend, but it's all in good fun, as this Cleveland native brings in that trademark sense of ironic humor. (You have to be tough, after all.) He takes the stage tonight at 8 at
3775 East Park Dr., Beachwood, bogeyscomedyclub.com.

A Christmas Carol
This Great Lakes Theater production of Charles Dickens' classic never fails to engage and delight. Framed cozily as a story within a story in this Gerald Freedman adaptation, the production really comes alive once the ghost of Jacob Marley appears, dragging his chains and creaking eerily with every movement. This annual tribute to knee-jerk liberal sentiments, like compassion for the downtrodden, is always a must-see — whether you've seen it before or not. Tonight's performance takes place at 7:30 at the Ohio Theatre. Consult the Playhouse Square website for more info and for COVID protocols.
1501 Euclid Ave., 216-241-6000, playhousesquare.org.

Tyler Chronicles
Tyler Chronicles started his stand-up comedy career at open mic nights but gained fame after his first television appearance as a personality was on WeTV on a hit television show called Bossip. He then became a cast member on MTV’s Wild N’ Out and has steadily toured as a headliner ever since. He performs tonight at 7:30 and 10 at the Improv, where he has shows scheduled through Sunday.
1148 Main Ave., 216-696-IMPROV, clevelandimprov.com.

French Perspectives
French Perspectives, a popular sister piano duo returns to Severance Music Center today to perform work by American composer and guitarist Bryce Dessner, who has won Grammy Awards both as a classical composer and with his band The National. The concert begins at 7:30 p.m. Check the orchestra's website for ticket prices and COVID protocols.
11001 Euclid Ave., 216-231-1111, clevelandorchestra.com.

Monsters vs. Toronto Marlies
The Toronto Marlies come down from Canada tonight to face the Monsters at 7 at Rocket Mortgage FieldHouse. A 1-2-3 Friday promotion will be in place tonight, and fans will get $1 Pepsis, $2 hot dogs and $3 select 12 oz. beers. Consult the Rocket Mortgage FieldHouse website for ticket prices.
One Center Court, 216-420-2000, rocketmortgagefieldhouse.com.

Tom Petty & the Heartbreakers Fan Weekend
To celebrate the opening of a new Tom Petty and the Heartbreakers exhibit, the Rock Hall hosts a special weekend tribute to the classic rock act. Fans can view Rock Hall vault footage of Tom Petty and The Heartbreakers featured in the Power of Rock Experience showcasing Petty’s legendary “While My Guitar Gently Weeps” performance with Prince and his iconic Super Bowl Halftime performance as highlighted in The Biggest Show on Turf. There will also be a photo opportunity at the Long Live Rock art installation on the plaza. At the top of every hour, Tom Petty and the Heartbreaker’s music will be played on the Rock Boxes located throughout downtown Cleveland, along East 9th Street, and all day inside the museum. Check the Rock Hall website for more details.
1100 Rock and Roll Blvd., 216-515-8444, rockhall.com.

Christopher Titus
Comedian Christopher Titus has been through a lot in his life: getting stabbed by a psycho girlfriend, getting fired from a suicide hotline, drunkenly falling into a bonfire, and all the while being told to “quit being a wussy” by his uber-militaristic dad. This guy doesn’t just tell jokes; he tells full-on stories and they are hilarious. He takes the stage at Hilarities at 7 and 9:30 tonight. He has shows scheduled at the club through Saturday.
2035 East Fourth St., 216-241-7425, pickwickandfrolic.com.

The Year of Magical Thinking
An adaptation of Joan Didion's memoir, The Year of Magical Thinking "transforms the story of the sudden and unexpected loss into a stunning and powerful one-woman play," as it's put in a press release. Tonight's performance takes place at 8 p.m. at Kennedy's Cabaret, where performances continue through the weekend. Check the Playhouse Square website for more info and COVID protocols.
1501 Euclid Ave., 216-241-6000, playhousesquare.org.

SAT 11/27
Cavaliers vs. Orlando Magic
In the midst of a rebuilding season, the Orlando Magic have stumbled out the gate and have one of the worst records in the Eastern Conference. Point guard Cole Anthony does his best to hold the thing together, but he doesn’t have many good options when it comes to passing the rock. The Magic take on the Cavs tonight at 8 at Rocket Mortgage FieldHouse. Check the website for ticket prices.
One Center Court, 216-420-2000, rocketmortgagefieldhouse.com.

Downtown Cleveland Alliance’s 2021 Winterfest and Holiday Tree Lighting
Downtown Cleveland Alliance (DCA) marks the official start of the holiday season with its annual tree lighting on Public Square and the kickoff to citywide Winterfest celebrations. The free festivities begin at 4 p.m., with a lighting ceremony and a fireworks finale starting at 6 p.m. There will be live music and appearances from Santa Claus as well as live and interactive visual arts demonstrations, ice skating, carriage rides, food trucks and fire pits. Following the tree lighting event, DCA and a variety of partners will present an immersive, citywide, and winter’s long experience for Clevelanders.

Light It Up!
Cleveland Play House presents this brand new, family-friendly musical set in Cleveland that, as it's put in a press release, "illuminates the power of love, kindness and each person’s ability to make every day brighter. The world premiere musical features original pop, rock, gospel and jazz holiday tunes as well as new arrangements of Christmas favorites by Tony Award-winning composer Jason Michael Webb. Tonight's performance takes place at 7:30 at the Allen Theatre. Check the Playhouse Square website for information about more upcoming shows as well as ticket prices and COVID protocols.
1407 Euclid Ave., playhousesquare.org.

SUN 11/28
Genghis Con Mini Pop-Up
Find comics, zines and prints at this Mini Pop-Up that takes place from 1 to 6 p.m. at the Pivot Art Center Lobby. Note that anyone entering the public areas of the building must wear a mask.
2937 W. 25th St., genghisconcleveland.com.

Jokes on You
Inspired by crowd work clinicians like Dave Attell, Ian Bagg, and Big Jay Oakerson, Jokes On You makes the audience the center of the show by "pushing comics to avoid prepared material or written jokes and instead focus on organic interaction with the audience," as it's put in a press release about this event, which takes place tonight at 7 at Hilarities. John Bruton and Bill Squire host the event. Last Sunday of every month.
2035 East Fourth St., 216-241-7425, pickwickandfrolic.com.

Songs of the Polka King Release Party with Joey Miskulin & the KTB
Frank Yankovic recorded an estimated 200 + albums and capped off his reign with the release of Songs of the Polka King in 1995 and Songs of the Polka King, Vol. 2, issued just before his passing. Now these two Grammy-nominated albums have been digitally remastered and combined by Cleveland International Records appropriately titled Songs of the Polka King – The Ultimate Collection on CD and as a 2 LP set, available on vinyl for the very first time. Tonight's special show at the Beachland Ballroom features the recordings’ producer Joey Miskulin, who became friends with Yankovic when he was still a young accordion player at 13. Miskulin went on to become a well known producer in Nashville and spent years on the road with Riders in the Sky. He just recently returned to the Cleveland area. The concert begins at 2 p.m.; check the Beachland website for ticket prices.
15711 Waterloo Rd., 216-383-1124, beachlandballroom.com.

C-Notes Things to Do in Cleveland This Weekend